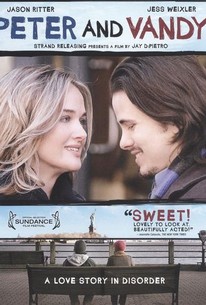 One couple's stormy relationship is examined out of chronological order in this drama written and directed by Jay DiPietro, adapted from his play. Peter (Jason Ritter) and Vandy (Jess Weixler) meet when both are college students; they fall in love and live together for a while, but on a certain fundamental level they're never fully comfortable with one another, and eventually they go their separate ways. But rather than tell their story from beginning to end, Peter and Vandy jumps back and forth in time, with the couple midway through their romance before we've seen their first date. DiPietro allows us to see how the flaws in their relationship -- Peter's discomfort around Vandy and their habit of bickering about petty things -- were present at the beginning, lurking around the corner even in their happiest moments. Peter and Vandy received its world premiere at the 2009 Sundance Film Festival.

John Becker Good
as Not Keith

Chris Lopata
as Not Keith's Friend
View All

News & Interviews for Peter and Vandy

View All Peter and Vandy News

Critic Reviews for Peter and Vandy

Jess Weixler (Teeth) is particularly lovely as Vandy, even when the mild young woman has to endure her beloved's screaming criticism of her sandwich-making methods.

More a designer frame for actors than nourishing entertainment.

Despite two very ap pealing leads in Jason Ritter and Jess Weixler, Jay DiPietro's bittersweet romantic comedy Peter and Vandy is yet another graduate of Sundance's Class of '09 that doesn't live up to its initial promise.

Their "authenticity" frequently trumps their ability to engage us.

The movie's saving grace is Weixler, who manages to seem effortlessly natural without resorting to whiny faux naturalism. As she did in Teeth, Weixler grounds an otherwise glib conceptual exercise through the force of her presence.

Celebrate the little things and the honesty of love and life with Peter and Vandy.

This is a lovely, charming film with a slow burn that sneaks up on you.

Whenever a romance flick aspires to be more than stupid sex gags and over-the-top waterworks, then that's when I'll advise you to stand in line for a ticket.

Arguing over take-out food, Weixler makes Peter and Vandy a love story that, while not always lovely to watch, is consistently compelling.

Flirts with indie-filmmaking-by-the-numbers but still manages a refreshingly clear-eyed look at relationships.

Touching and insightful, a film that understands what that first whoosh of emotion in a relationship feels like %u2013 and how quickly love can change and vanish.

Audience Reviews for Peter and Vandy

This was just silly. The switchbacks were annoying, as was the acting of these two.

Essentially, this film is a very basic love story, filled with all the requisite elements of a modern romantic comedy. The couple gets together, breaks up, and ... well, can you guess the end? But it clings to non-linear story-telling as though Tarantino-esque tricks will save it from the seventh ring of cliche hell. To some degree the fractured scenes kept me engaged, but it was only to the extent that I was trying to place the characters in time. If it were made next year, I would have said that this film is a cheap imitation of Blue Valentine. But whereas Blue Valentine juxtaposed the two stories to stunning effect in order to climax the joining and the separation at the same time, there is no such order to Peter and Vandy. The reasons for the time shifts are never readily apparent and don't add to the film's dramatic effect. Additionally, the peanut butter and jelly scene attempts to either be brutal in the the tradition of Closer and Scenes from a Marriage or funny in the tradition of Hannah and Her Sisters, but Peter's reaction to the way Vandy makes peanut butter and jelly sandwiches (with two knives though only one is necessary in Peter's view) is so over-the-top that we end up losing respect for both characters. Peter's loud, profane diatribe is at times quite scary, and when Vandy stays with him, we can't help but wonder why. Overall, this isn't a film with anything new to say or any new way to say it.

"Peter and Vandy" is an endearingly perceptive movie that makes great use of New York City locations, especially the overhead shot of the benches. Told in a nonsequential fashion, the movie does a good job of showing how a relationship may not always survive the initial attraction. Take Peter(Jason Ritter) and Vandy(Jess Weixler) for example. They meet sort of cute one day during lunch when she has jury duty. The first meeting when he approaches her does not go off that well, but the second one does with an assist from the New York Times crossword puzzle. But that's about the only time they are on the same page. Usually their not being in sync comes down to differences in appetites, be they gastronomic or carnal.(There's also an inference that they come from and are heading to different places.) While eating outside may usually be a fine idea, doing so during winter is not an especially appealing one.

Excellent film! I wasn't expecting a lot out of this film given that I wasn't familiar with either of the actors or the director but I really enjoyed it. If you like honest films about relationships then you will love this.