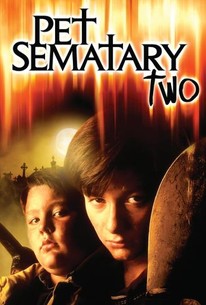 Critics Consensus: Not realizing that it had no unfinished business, Pet Sematary rises from the grave once more to beat an undead corpse.

Critic Consensus: Not realizing that it had no unfinished business, Pet Sematary rises from the grave once more to beat an undead corpse.

This follow-up to the sizable horror hit concerns a Maine teenager who discovers the eerie power of a legendary local haunt. Edward Furlong stars as Jeff Matthews, who, with his veterinarian father Chase (Anthony Edwards), moves to latter's small hometown of Ludlow, Maine, in order to escape unhappy memories. Jeff's divorced mother, low-budget horror movie actress Renee (Darlanne Fluegel), was recently electrocuted and killed in a freak accident -- the entire incident was witnessed by Jeff. In his new community, Jeff hears stories of an ancient Indian burial ground nearby where dead pets that are interred come back to life. Jeff also becomes friends with pudgy Drew (Jason McGuire), whose abusive, bullying dad Gus (Clancy Brown) is Ludlow's sheriff. When Gus kills his son's dog, Drew and Jeff bury the animal, which returns from the dead. When the vengeful dog kills Gus, Drew and Jeff bury the lawman in the cemetery and he comes back significantly the worse for wear, wreaking evil havoc that temporarily puts several of Ludlow's residents six feet under. The original Pet Sematary (1989) was based on a novel by Stephen King, who did not participate in the sequel.

Joe Dorsey
as Caretaker
View All

Stephen King, who usually doesn't mind his name attached to any form of cinematic garbage, had it successfully removed from the credits of this picture, which should alert any potential viewer to tread carefully.

Better-acted than the original and not without its perverse charms - mostly of the Clancy Brown variety - but a shameless cash-in sequel for the most part.

For now, though, it's time for Hollywood to lay this whole burial ground theme to rest.

It's a sequel that really should never have been made...

Pet Sematary II looks like a feature that quickly slipped out of Lambert's control, and she decided to drive the production into the ground out of spite.

Life's too short to spend an hour-and-a-half of it watching hollow cinematic dreck like Pet Sematary Two. There are some neat gory bits, though.

An easy sequel to "dig"! A Hip Horror Film for Teens

A needless sequel, but a pretty good one all the same.

The first one was bad enough as is...

Pet Sematary two is a pretty bad sequel to a very good horror flick. As usual, the filmmakers decided to create a follow-up to a fun horror flick, but this time around, the sequel really doesn't pay off. The film may appeal to gore fans, as it is very gruesome and director Mary Lambert leaves nothing out. This sequel acts as if it forgets the first film, that actually delivered terror; but this time around, it just delivers on the bloodletting. What I loved about the original was the supernatural elements that rounded out a good story, and in fact it probably was the best work by author Stephen King. Pet Sematary tries to amp up the game by providing more blood and gore and the film doesn't stand out. I felt that this film missed the mark and didn't deliver anything aside from gore. A good story would have helped, but the film lacked in that department. I felt the film lacked anything really interesting that would make it watchable. This sequel relies more on gore than anything, and it's fine if that's what you're expecting, but to those who loved those who loved the original, this will most likely disappoint you. As far as sequels are concerned, this follow-up is bad to mediocre and with only the gore factor to deliver its horror, the film ends up being a waste of time. There are a few decent elements here and there, but as a whole; the film doesn't work and like I previously stated, it's a disappointment. The film could have been much better and the filmmakers could have thought of a better plot, but it's just bland.

Gus Gilbert: No Brain, no pain... think about it.  "Raise Some Hell." Pet Sematary Two was surprising because  it wasn't nearly as horrible as I thought it would be. It's still bad, but it has its entertaining parts. It doesn't make much sense to make a remake of Pet Sematary, but it happened, and  it could have turned out much worse. Comparatively to the first one, it's not as creepy(and the first one wasn't that creepy). This one has a whole lot going on when nothing is going on. The movie is weird, goofy and over the top. The plot is slightly more ridiculous than that of the first, but nothing new is really established; just more of it. Basically it's the first movie, but uses the end of the first movie and makes it pretty much the whole film. There are a lot more deaths and a lot more blood and the whole thing comes off as a mess.  It isn't scary and they try to make up for that by making it funny, when it should be scary. Sometimes it works to an extent, but most of the time it just comes off as annoying. There's a lot of family drama involved like in the original, but it isn't used as well and most of it just comes off as laughable.  What I did like about this more than the first was that the acting was better. I know that isn't saying that much.  I liked Edward Furlong in his role as the grieving young kid. On a whole the movie isn't good at all. It makes no effort to stand apart from the first and really is just a bad sequel of a not so great horror film.

Not as good as the first, but it brings in a large amount of gore, which feels humorously over the top at times. I liked it.

Passable sequel, but barely worth watching. Possibly only of interest for nostalgic reasons. I think if you watched it as a new release now, you would be pretty disappointed with it. Plot pretty crap, some of it makes no sense, and quite honestly was bored half way through it. Missing the creepiness of the first one. Now THAT was a film to give you nightmares!