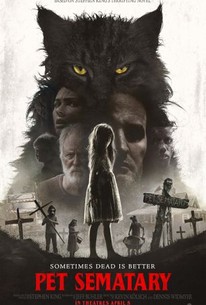 Critics Consensus: Pet Sematary takes its source material in a few different directions, but this remake feels like an exhuming almost as often as it does a revival.

Critics Consensus: Pet Sematary takes its source material in a few different directions, but this remake feels like an exhuming almost as often as it does a revival.

Critic Consensus: Pet Sematary takes its source material in a few different directions, but this remake feels like an exhuming almost as often as it does a revival.

Based on the seminal horror novel by Stephen King, Pet Sematary follows Dr. Louis Creed (Jason Clarke), who, after relocating with his wife Rachel (Amy Seimetz) and their two young children from Boston to rural Maine, discovers a mysterious burial ground hidden deep in the woods near the family's new home. When tragedy strikes, Louis turns to his unusual neighbor, Jud Crandall (John Lithgow), setting off a perilous chain reaction that unleashes an unfathomable evil with horrific consequences.

It's just a little too pulpy for the potential power of the story.

Pet Sematary [is a] fable fueled by a sense of culpability for things that aren't always explained.

Clarke is fantastic as Louis, and Laurence is even better as the precocious, painfully sensitive Ellie. She steals the movie, with Kolsch and Widmyer's blessing.

Directors Kevin Kölsch and Dennis Widmyer make the tone just a little cheesy, as the premise deserves, but not overripe. The scares are easy -- sometimes literally a cat jumping from the shadows -- but cleanly done.

"Pet Sematary" addresses issues of death and our unwillingness to accept it in a fun, frank manner. The dead don't always have it this good.

Hidden within the deep recesses of Kevin Kolsch and Dennis Widmye's not-that-scary movie is a really compelling film about death, unfortunately they're tasked with a bland, way too literal script to be able to make it.

Pet Sematary is a perfectly functional little horror movie. It doesn't truck in '80s nostalgia, and its significant changes to the source material mostly turn out to be improvements.

Pet Sematary is so engrossed in its own self importance and supposed deeper meaning it forgets to frighten us, or even give us a reason to care in the first place.

An enjoyable but innocuous genre exercise which mostly misses the book's emotional weight.

The 2019 version of Pet Sematary is enough like the original, and enough of it's own thing, to make it more than worth a watch for horror fans!

Pet Sematary has solid scares and performances, but never manages to reach greatness the way other recent Stephen King adaptations have.

The things that this 2019 Pet Sematary add to the original may not strictly speaking be improvements, but at least it's not a shot for shot remake, which it was looking like it might have been based on the trailers. A couple of those additions I was not particularly fondof, one's a massive spoiler so I'll let that slide, but the biggest one I knew going into it, 'cause of the trailers, which is: As much as I appreciate John Lithgow, I really wish they had kept the original guy (or an emulation of him I more mean) on as Jud Crandall. Unrelated sidenote, but when I was young (and I found out about Pet Sematary overall through the Ramones song of the same name) my dad always told me that it was called Pet Sematary and not Pet Cemetary because Americans spelt it that way. That guy lied about... Just everything.

I already know my computer's spell check is going to hate this review. In the wake of the box-office bonanza of It, prolific author Stephen King is a hot property once again for studios and everything old is new again. Pet Sematary (yes it's intentionally misspelled) is a remake of a 1989 that was a hit back in the day. It was never regarded as a good movie but had its campy entertainment, so there was some room for improvement. Early reviews were positive and I raised my hopes for the 2019 edition, but after having seen the finished product, maybe some movies too are better off left dead. Eschewing a sense of camp, the film risks being overrun by its own sense of seriousness, which only works if there is room given to explore the ramifications of grief, the choices people make when they're hurting, and the irony of good intentions. If you're going to go in a serious direction then you need the confidence and dedication to play to that decision, and that's not the case with the 2019 Pet Sematary. It's lacking those important moments of contemplation or even dwelling with the horror of bringing back a loved one from the dead. There's only so much evil hissing cat you can have before you hit a limit and start saying, "What else you got?" There's going to be an escalation, I don't think it's much of a spoiler, considering the nature of the premise but also its predecessor being 30 years old, that one of the children will die only to be brought back. It's also an easy speculation that they will "come back wrong" but the drama is processing this decision and trying to mitigate the mounting consequences. How far will a parent go to protect their child even if that child is an undead murderer? The trials should strain the moral resolve or our protagonist while reveling in the grotesque. Because every viewer is going to already expect this much, it's the film's job to develop this premise in a satisfying manner and/or provide surprises from our expectations. Pet Sematary 2019 unfortunately does neither, barreling through the dramatic downtime when it could be developing its horror and unleashing standard slasher jump scares. When Louis is brushing his daughter's tangled hair he runs his fingers over the metal staples in the back of her skull holding her head together. It's a stark reminder that she is not the same, and it goes beyond her scraggly voice and unyielding stares meant to convey the same information. The film needed more moments like this, small details to unnerve and remind, rather than making her essentially The Ring girl from the start. The movie voluntarily eliminates its own storytelling runway, giving it little room to ramp things up and being forced to simply jump to the big bad killer demon girl. The filmmakers try and compensate somewhat by giving Rachel her own independent haunting, seeing hallucinations of her dead, twisted deformed sister. Those sequences reminded me of the slow stirring sequences in 2017's It, drawing in the audience to dread what will happen next. It's a side plot that could be eliminated entirely and I enjoyed these sequences the most because it was at least something pregnant with possibility. For fans of King, or fans of genre horror, there may be enough standard thrills and chills to enjoy the new Pet Sematary. In the extremely spotty spectrum of King movie adaptations, it's definitely somewhere in the middle, not bad per se but nothing special. Nate's Grade: C+

Whereas King's novel was an atmospheric, slow burn, the film felt rushed and lifeless, like a Wikipedia summary. The filmmakers do not seem to have invested any time in making these characters believable, likable, sympathetic, or engaging. The entire movie simply goes through the motions, aimlessly.

It's not very often that a remake comes around and impresses fans of the original film, as well as create new fans alike, so when that happens, I believe it deserves to be celebrated. While I enjoyed the original Pet Sematary, it was almost as if the filmmakers hadn't quite gotten the right grasp in terms of everything surrounding the story itself. Personally, I found the original film lacking in performances, as well as the editing choices. The original film doesn't hold up very well, at least in my opinion, so I can see why they decided to give it a remake. Surprisingly, this 2019 version of Pet Seminary is actually an improvement on a movie I quite enjoyed already, so I can't deny for a second that I had a good time with this one. Let's dive in. After a family moves into a new home near the woods, Ellie (the young daughter) finds her way down a path behind their house, which leads to a strange cemetery. Meeting an elderly man in Jud, he befriends her and her parents, but that may not be for the best. Just beyond this cemetery, which goes by the name Pet Sematary, lies a burial ground, where things can be brought back from the dead. Once Louis (the father) finds the family cat has died, he decides to make this the burial spot for him. This is all part of the first act of the film, so this isn't giving anything away for those who are unfamiliar with the story. From here, the film just becomes creepier and creepier, making for a great horror flick. Now, where I fear this movie won't win over those who have seen the original and didn't like it, is with the fact that it very similarly tells the same story. There are great changes to the film that ultimately make it a better overall film, but most of the story beats are present and if you weren't a fan the first time, I doubt this one will win you over. With that said, this is a chilling, creepy, and satisfying story from beginning to end, that I feel many horror fans will get a kick out of. Although the fact that it didn't feel all that original was a detriment for me, it's so well-made that I was able to ignore that aspect. Most great horror films are remembered for their scares and eerie atmospheres and while this movie takes slightly longer than most horror films to hit its stride in that regard, it definitely goes all out by the third act. From the sound design to the cinematography throughout, everything about this movie felt meticulously crafted. On top of that, there are terrific performances by the entire cast. Jason Clarke is great as always and Amy Seimetz (who plays his wife in the film) surely has a bright future ahead of her. Like all movies though, there's usually one performance that stands out as the best and I feel as though young JetÃ (C) Laurence, who has only been in the game for a few years now, stole the show in a big way. In the end, this is a remake that deserved to be made for many reasons. The cheesiness of the original doesn't hold up and the performances sort of ruin it for me as well. The 2019 version of Pet Seminary doesn't do a lot new to call this a masterpiece in comparison, but it's definitely a solid improvement. I really like the story behind this movie and the horror elements fantastic as well. To fans of the horror genre or fans of the original film, I recommend checking this one out.