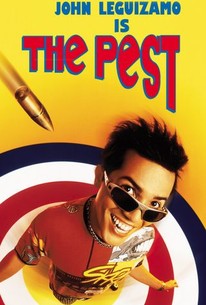 Critics Consensus: The Pest aims for zany comedy with social commentary, misses, and lands squarely at offensive misfire thanks to John Leguizamo's over-caffeinated performance and a script laden with stereotypes.

Critics Consensus: The Pest aims for zany comedy with social commentary, misses, and lands squarely at offensive misfire thanks to John Leguizamo's over-caffeinated performance and a script laden with stereotypes.

Critic Consensus: The Pest aims for zany comedy with social commentary, misses, and lands squarely at offensive misfire thanks to John Leguizamo's over-caffeinated performance and a script laden with stereotypes.

A man discovers the lighter side of being hunted down like an animal in this manic comedy. Pestario "Pest" Vargas (John Leguizamo) is a low-rent con man from Miami's South Beach who has fallen deeply in debt to ill-tempered members of the Scottish mafia (complete with kilts). Desperate to raise $50,000 to stave off having his legs broken (and possibly turned into haggis), Vargas takes an offer for a very high paying one day job from Gustav Shank (Jeffrey Jones), a German businessman visiting Florida. However, it's not until later that Vargas finds out what Shank has in mind. The lunatic white supremacist Shank transports Vargas to his island compound, Little Germany, and announces that he will hunt him as wild game. If Vargas can survive for 24 hours, he gets the cash; otherwise, his head will join the others stuffed and mounted on Shank's wall. Can Vargas' speed, agility, and gift for cheesy impersonations save him now? John Leguizamo co-wrote The Pest's original story, loosely based on the classic adventure tale The Most Dangerous Game. ~ Mark Deming, Rovi

Will Potter
as White Guy

Critic Reviews for The Pest

It seems to be targeted at eight-year-old boys with attention-deficit disorder, and could have been more competently made by any one of them.

Pic exists solely to showcase Leguizamo's wild and crazy antics, which are very much an acquired taste.

When Mr. Leguizamo isn't doing third-rate ethnic parody, he is wallowing in scatological jokes that are so poorly prepared and executed that they make similar antics by Mr. Carrey play like classic routines.

Talented and versatile actor-comedian John Leguizamo indulges himself so totally with incessant mugging, mimicking and all-around showing off that he begins to wear out his welcome before the opening credit sequence is over.

Obviously, someone must have told Leguizamo he's a comic genius. Whoever did that isn't his friend.

It's the kind of movie where every paying customer deserves to receive a handwritten apology from the producers.

It pains me to admit just how obnoxious The Pest is because it has all the ingredients of the kind of guilty pleasure I love.

Even surrounded by unbearable sloppiness, Leguizamo is fascinating to watch.

Pass that can of Black Flag, hon.

If you have any doubt that John Leguizamo is not funny, this movie will handily reinforce that notion.

The script and Leguizamo's talents don't mesh, so the actor comes off as more offensive than funny.

There is not a socioeconomic, political, ethnic or gender group that is left unoffended.

Audience Reviews for The Pest

This is one of those comedies that use gross out moments in trying to create humor. This film fails at being a good comedy and it is not worth watching. The reason why the film fails is because it has a poorly written script, one that isn't really funny. This film had a good idea, but execution of its comedy was very poor. I've seen this film when originally released, and though I thought that the idea was good, there was just something missing from this film to really make it worth seeing. This is simply put, a stupid comedy that is more annoying than funny. John Leguizamo is pretty funny doing his stand-up comedy, but in this film, he's absolutely wasted. This is a poorly constructed film that has dimwitted humor that doesn't work. This film had a good idea, but the gags are what make this one fail, and they're more gross than funny. This really could have been a good film, but due to a poor script, poor comedy and overall bad acting, it doesn't have anything going for it. Don't expect anything good with this film. It was a tiresome film, with no redeeming qualities and it just fell flat. There are no good comedy bits here, and there is just a poorly constructed comedy with gross out laughs that really don't work. This is a poorly acted film, directed film and one to avoid. Watch something else instead, The Pest is never funny and is more annoying than anything. Leguizamo has made better films; this is just one to forget.

Fun and unforgettable. The thing is: The Pest is terrible dumb, and totally bad written. Anyway, still funny and very entertaining. One of my guild pleasure.

Lets Skip this one.

i rented this one time and because of that, i really dont care to talk about it