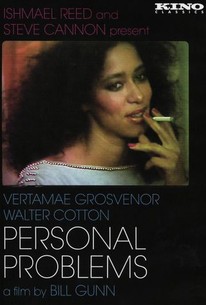 Harlem nurse Johnnie Mae Brown (Vertamae Grosvenor) juggles a melodramatic life with her husband, secret lover, and father-in-law. Walter Cotton and Ishmael Reed also star. This entirely African American-conceived and produced ensemble drama is the result of a collaboration of a pair of pioneering Black artists: writer Ishmael Reed and filmmaker Bill Gunn, who wrote and directed the underground classic Ganja & Hess and wrote the screenplay for Hal Ashby's The Landlord. Originally intended to air on public television in 1980, it went unseen for many years; the original tapes have been carefully restored by Kino Lorber and the film is now available in its full-length version for the first time in decades.

Mizan Kirby
as The Visitor

An accessible experiment made at the dawn of the video era.

For all its rough edges, "Personal Problems" retains a vitality and an integrity that practically bounds off the screen.

A view of African Americans that's messy, complicated, dramatic, and, most important, honest.

The movie's panoramic cityscapes teem with the gritty details of emotional life: romance and chores, hope and despair and loss, bitter resentments and rowdy reckonings with mortality.

It's a necessary work, and one of the major repertory revivals of this or any other year.

One doesn't quite watch Personal Problems for its technical superiority, one watches it for the problems that still persist, to draw a line of legacy for A Wrinkle in Time, Black Panther and Mudbound that have been made

Uneven, sometimes disjointed, its narrative threads nowhere near resolved at the end, Personal Problems is nonetheless something rare and valuable, particularly for its era.

There is a film, possibly a gem, buried way deep down here. It would be an interesting project to try to build that film from the pieces.

There is no escaping the degraded look of early 3/4" video, digitized for the restoration, but the acting and storytelling immerse us into a real black experience of the time, unadulterated by Hollywood's cliches.

Bill Gunn and Ishmael Reed collapse conventional notions of reality, providing simultaneous glimpses into the minds of dozens of characters, lingering on scenes and informing them with confessional intensity.

There are no featured audience reviews yet. Click the link below to see what others say about Personal Problems!