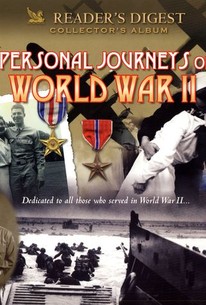 The epic length (3 1/2 hour) Time Life release Personal Journeys of World War II stitches together recollections from U.S. soldiers who served in the titular global conflict, to create a tapestry-style oral history of the century-defining fight against Nazi domination of Europe and Japanese imperialist domination of the Pacific. As narrated by the late actor Glenn Ford - himself a WWII-era Navy enlistee - this program bridges reminiscences from those Americans who served at home and reminiscences from those who served abroad, intercut with telling footage culled from newsreel and archival sources, much of it depicting battlefront activity. Participants include: Senator Daniel K. Inouye, President Gerald Ford, actor Eli Wallach, Senator Bob Dole and many others.

There are no critic reviews yet for Personal Journeys of World War II. Keep checking Rotten Tomatoes for updates!

There are no featured reviews for Personal Journeys of World War II at this time.