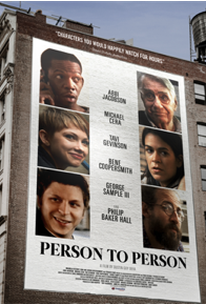 Critics Consensus: Person to Person's moments of insight and absorbing character development are scattered among an aimless, disjointed narrative.

Critics Consensus: Person to Person's moments of insight and absorbing character development are scattered among an aimless, disjointed narrative.

Critic Consensus: Person to Person's moments of insight and absorbing character development are scattered among an aimless, disjointed narrative.

In PERSON TO PERSON, a record collector hustles for a big score while his heartbroken roommate tries to erase a terrible mistake, a teenager bears witness to her best friend's new relationship, and a rookie reporter, alongside her demanding supervisor, chases the clues of a murder case involving a life-weary clock shop owner. Shot entirely in 16mm, PERSON TO PERSON effortlessly humanizes its characters, invoking an earnest realism in the performances of its ensemble cast: Michael Cera, Abbi Jacobson, Michaela Watkins, and newcomer Bene Coopersmith. Defa demonstrates his aptitude for honest storytelling as he explores the absurdity and challenges of forging human connections.

News & Interviews for Person to Person

View All Person to Person News

Critic Reviews for Person to Person

The Big Apple has never looked so small and inconsequential.

A solid cast whose talents mostly go to waste and a movie that meanders from one moment to the next without much momentum.

The soundtrack - an infectious blend of retro gospel, R&B and funk - often feels too breezy and soulful for this mundane affair, especially when it precedes scenes with pouty teenagers, even if they're world-weary sorts.

Person to Person is a gently comic slices-of-life drama, the kind where a variety of people's conflicting, occasionally overlapping experience of the city comes together into a messy whole.

It's a slight film, but it's populated by enjoyable moments and wry observations that will appeal to fans of talky indies.

Don't expect satisfying answers from this aimless drama, which is chockablock with characters but offers little insight or cohesive storytelling.

The old pan that something is "less than the sum of its parts" does not quite apply here.

The people didn't feel real enough and so it felt like following around a bunch of New York caricatures instead of people.

It has the warm, familiar feeling of regional cinema sharing its insatiable curiosity in observing the cultural attitude of a community.

The film has a huge heart and a sneaky sense of humor, and there is a propulsive musical energy that reminds you of vintage Alan Rudolph or Paul Mazursky.

It makes me want to fly out to the Big Apple right now and stroll the avenues, imbibing its unique offerings and seeing what hidden stories are being told in its nooks and crannies.

Audience Reviews for Person to Person

There are no featured audience reviews yet. Click the link below to see what others say about Person to Person!