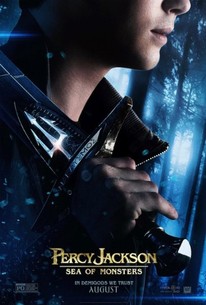 Critics Consensus: It's pretty and packed with action; unfortunately, Percy Jackson: Sea of Monsters is also waterlogged with characters and plots that can't help but feel derivative.

Critics Consensus: It's pretty and packed with action; unfortunately, Percy Jackson: Sea of Monsters is also waterlogged with characters and plots that can't help but feel derivative.

Critic Consensus: It's pretty and packed with action; unfortunately, Percy Jackson: Sea of Monsters is also waterlogged with characters and plots that can't help but feel derivative.

Percy Jackson, the son of Poseidon, continues his epic journey to fulfill his destiny, as he teams with his demigod friends to retrieve the Golden Fleece, which has the power to save their home and training ground, Camp Half-Blood.

Octavia Spencer
as Martha
View All

Scrappy and kind-hearted, with odd flashes of high camp - even if its universe of patchworked Greek mythological elements still makes little sense.

Precious little about this is particularly memorable, but it's the odd touch of local color that makes these routine acts of derring-do a bit easier to bear.

The kids are charmless, the adults bemused.

There is a better film about gods and monsters: it's called Gods and Monsters.

Lerman is adroit at looking eager and battle-worthy but not too cocky in a film as much about character development as sword play.

Younger audiences may still find themselves entertained by Sea of Monsters, but by slowing down the pace and having some faith in its actors, it could have been so much more.

Unfortunately, Monsters is relentlessly derivative and a watered-down sci-fi saga that the tweens and teens will tune out with all the nonchalant gesture of popping a stubborn pimple on their faces.

A slight but fun romp through Greek mythology with a modern twist...Grown-ups will hate it, but tween-age kids will have a blast.

CG spectacle trumps character but, as engineered market-fillers go, it's at least cheerfully cheap and not unlikeable: a Poundland Potter, as it were.

For the majority of Percy Jackson: Sea of Monsters, the titular character spends his time moping over the uncertainty of his heroism.

A kitsch-fest; a kit-and-caboodle thematic ransacking sellout, geared to drain your kiddie dollars. Like a city dump, you can find anything in there-but would you want to?

I didn't expect much when the first "Percy Jackson" movie came out and was pleasantly surprised. I really enjoyed it and thought it was much better than other young adult fantasy movies. Did I think it had enough juice for a franchise? Probably not, but for a one off film, it was good. So with the sequel my expectations were lower, and that's a good thing, because this falls in the "not nearly as good as the first movie" category of sequels. Here, Percy(Logan Lerman) and his demi-god friends, and Cyclops half brother, have to recover the golden fleece and save their camp. This feels like a tv episode where it's like "hey guys, let's go on an adventure", but doesn't move the story along at all. All the characters are pretty stagnant, and the Cyclops brother is lame and poorly acted. Last year Lerman was the star of one of my favorite movies of the year, "Perks of a Wallflower". He showed he can be a terrific actor, but this feels like a step back for him. Also, for being 2013, the effects weren't really up to snuff with other similar movies. Now, having said all that, I'm not the target audience. This is for kids/teens, and I can see them enjoying it. Will(my 7 year old nephew) came in with about 30 minutes left and seemed to enjoy it. It leaves it open for a third one, which I don't think it needs, but hopefully it will be better and give this franchise the life it needs to sustain.

In Demi-gods we trust. Good Movie! Percy Jackson: Sea of Monsters only settles for being an "okay" movie. There are constant deviations from the novel, only decent scripting, acting, visual effects, good music, and mixed acting. However, it is not a waste, especially for fans of Percy Jackson. Now that many characters and plot points have been set into place after being shattered by the first film, the makers of this film have paved a promising path for another film that may be even better than the first two. In this retelling of Rick Riordans book, "The Sea of Monsters", Percy Jackson, accompanied by his friends Annabeth Chase, Clarisse La Rue and Tyson, his half brother, goes on a journey to the Sea of Monsters to retrieve the Golden Fleece and save Camp Half-Blood.

Much better film title this time around, loving the sound of it, alas if only the film was actually as good. The franchise moves on, the next chapter adapted from the novel of the same name, basically Greek mythology set within our present day and updated. This time our young hero 'Percy' must find the Golden Fleece to heal a magical tree that protects his home of Camp Half-Blood. The fleece can be found in the lair of the Cyclops 'Polyphemus' which itself lies within the Sea of Monsters (Bermuda Triangle). So off our little intrepid adventurers go to find it and save the world as we know it...kinda. Oh and did I forget to mention there are some bad guys also trying to get the fleece to raise 'Kronos'? well there you go. In all honesty I can't really recall much about the first film, it got so easily lost in a whirlwind of Potter-mania and some other nondescript replicas, but I did seem to slightly enjoy it according to my review (yep I read em). This of course is still the main problem with this franchise and any other really...they will always be compared to the superior Harry Potter. The kid with specs set the bar high and was the first big budget fantasy of its kind to do really well. After that every else has seemed weak in comparison, merely average imitations. This film does itself no favours simply because it looks average in the special effects department, a major flaw for a fantasy. Right from the start everything just looks lame, Camp Half-Blood just looks like some kind of summer holiday Cub Scout camp where you'd eat sausage n baked beans for dinner. The big creatures are obviously CGI and boy do they look it, most of them just stand out big time, that large mechanical bull that attacks the camp is laughable. There are various other big creatures throughout that are all CGI and none look any good frankly, accept for the odd closeup perhaps. The finale with Kronos is the same, if these were videogame in-game sequences I'd be impressed, but they aren't. Some sequences really do look truly awful in fact, I'm amazed they got through into the finished film!. When the young trio ride a big Seahorse thingy across the sea to reach the bad guys yacht, that is a bad one (oh and the yacht? that doesn't feel very fantasy-like does it, kinda out of place). They are riding a wet slippery sea creature at speed, yet they aren't holding on to anything, how do they stay on its back people?! plus they didn't seem all that wet afterwards. Then a bit later on in the same scene we see Percy and Luke ride/surf a big wave...don't ask it looks terrible, all the water effects look terrible. The only bit of originality to rear its head appeared to be the concept of making the three Stygian witches cab drivers in a yellow New York cab. A unique approach for sure and one that sort of works I guess...but then I realised I'd seen a similar idea before in 'Scrooged'. A common problem is the fact everything also seems so bland and derivative. All the characters are your bog standard types and offer nothing new, the hero, his sidekick, the female sidekick and the best friend who you know will get killed (and you also know will come back at the last minute). Next to that are the bog standard baddies led by the good looking charmer with blonde hair. I mean come on...at least lets try and make the characters look different from the Potter clan jesus!. You don't care about any of them because they are all so cliched, we've seen this all before and you know none of them will come to harm anyway so what's the point?. I guess what bothered me the most was the film was clearly trying to be epic, every scene is accompanied by a strong musical score as if that will make it so. Its not meant to be a dark emotional journey with teen angst that's for sure, its a light-hearted fantasy that doesn't show much or any death, but everything is built up to enormous proportions only to let you down. You simply can't connect with any of the characters or what's going on because the whole thing is such a basic videogame with step by step action sequences. Complete one task against a CGI foe, move on to the next, complete that task against a CGI puzzle, move on to the next...and so forth. You can tell the whole franchise isn't really going as planned seeing as this is only the second film and already the cast continuity has been compromised, two major characters recast. Still I gotta give some kudos for the attempt at bringing Greek mythology into the present day even though it doesn't really work, or should that be kudos for the novel?. Plenty of good morals throughout the adventure, lots of heroic actions and bouts of friendship that will make you gag, but the entire production is predictable, anti climatic and dull. A shoddy looking sequel which fails to better the first entry.