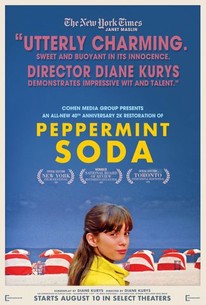 This gentle, closely observed autobiographical tale, a first film by director Diane Kurys, got a very favorable critical reception at the time of its release. It concerns the experiences of Anne (Eleonore Klarwein) and Frederique (Odile Michel), the 13- and 15-year-old daughters of a separated Jewish couple. They are attending a grim, rule-crazy school in the early 1960s. Anne is unsocial and not much of an "achiever"; she tries to find out what is going on around her by eavesdropping on her mother and her older sister. Frederique is much more outgoing, has a crush on someone much older than herself, and is beginning to feel the first pangs of love. They are both awkward around their father, whom they visit on school holidays. ~ Clarke Fountain, Rovi

Kurys, at the time a disillusioned actress-writer who reportedly had never held any kind of camera before, showed a remarkable assurance visually and rhythmically when mixing the serious with the playful.

Peppermint Soda feels timeless and relatable while also specific to its era - Kurys herself was between Anne's and Frédérique's ages in the years the film takes place.

Few films have managed to capture the innocence of childhood, and Kurys demonstrates in her first a capability and firm touch for not only the craft but the essence of fine film.

Peppermint Soda is a charming and poignant glimpse at two ordinary teenage girls dealing with all of the inherent messiness that comes with growing up a member of the so-called second sex.

The focus here isn't necessarily in what happens to Anne and Frédérique, so much as how they survive it, with fierce loyalty to each other, in a world that they're quickly learning won't always treat them kindly.

This is a charming film that makes its impact not with contrived plot points designed to trigger cheap emotional responses, but with disarmingly honest portrayals...

Peppermint Soda is a stellar example of the coming-of-age format.

Peppermint Soda is a valentine to the bittersweet joys of adolescence.

There are no featured reviews for Peppermint Soda at this time.