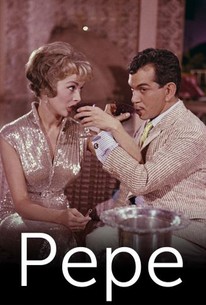 Popular Mexican comedian Cantinflas (Mario Moreno) plays the title character in this star-studded, amusing comedy drama by George Sidney. Pepe is the same sort of impoverished stereotype Cantinflas made famous in several of his comedies; in this case he is a hired hand on a ranch who chases down a horse for his employer. A boozing Hollywood director buys a white stallion belonging to Pepe's boss and the determined ranch hand decides to take off for Hollywood to get the horse back. Once in this new and strange environment -- where a lot of cameos by the likes of Jimmy Durante, Frank Sinatra, Zsa Zsa Gabor, Bing Crosby, Maurice Chevalier, and many others enliven the action -- Pepe becomes a friend to the alcoholic director. Unfortunately, what is missing here is "Cantinfletico." That is the nickname for the rambling non-sequitur characteristic of Cantinflas that no one else could master. The film was originally released at 195 minutes, then edited down to 157.

Jimmy Durante
as Himself

Bobby Darin
as Himself

Sammy Davis Jr.
as Himself

Richard Conte
as Himself

Maurice Chevalier
as Himself

Bing Crosby
as Himself

Joey Bishop
as Himself

Zsa Zsa Gabor
as Herself

Judy Garland
as Herself

Jack Lemmon
as Himself

Jay North
as Himself

Andre Previn
as Himself

Frank Sinatra
as Himself

Cesar Romero
as Himself

Billie Burke
as Herself

Edward G. Robinson
as Himself

Carlos Rivas
as Himself

Charles Coburn
as Himself

Tony Curtis
as Himself

Hedda Hopper
as Herself

Dean Martin
as Himself

Kim Novak
as Herself

Ann B. Davis
as Herself

E.E. Fogelson
as Himself

Jane Robinson
as Herself

Bunny Waters
as Herself

Robert B. Williams
as Immigration Officer

Frederico Roberto
as Cashier
View All

Cantinflas is a gifted and endearing comedian but his talents are sadly diluted in this marathon yarn.

The film Pepe which is draped round his rather ineffective personality, is an expensive, tasteless and dreary romp.

Despite the cameos of over 30 movie stars and big budget, George Sidney's gimmicky comedy, starring Mexican actor Cantinflas who goes to Hollywood to take care of his horse, is one of Hollywood's biggest flops of the 1960s.

There are no featured audience reviews yet. Click the link below to see what others say about Pepe!