The People Under The Stairs1991 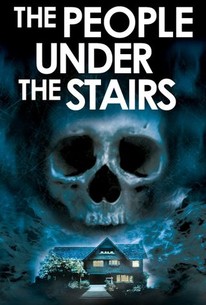 Critics Consensus: Held aloft by gonzo black comedy and socially conscious subtext, The People Under The Stairs marks a unique -- though wildly uneven -- change of pace for director Wes Craven.

Critics Consensus: Held aloft by gonzo black comedy and socially conscious subtext, The People Under The Stairs marks a unique -- though wildly uneven -- change of pace for director Wes Craven.

Critic Consensus: Held aloft by gonzo black comedy and socially conscious subtext, The People Under The Stairs marks a unique -- though wildly uneven -- change of pace for director Wes Craven.

The People Under The Stairs Videos

The People Under The Stairs Photos

Wes Craven wrote and directed this surrealistic horror-comedy, which was inspired by a true story of parents keeping their children locked in a basement for years. Fool (Brandon Adams), an African-American teen, breaks into the home of the wealthy landlords who evicted his family from a ghetto tenement. A fortune in gold coins is rumored to exist inside, but Fool discovers that the mansion is a chamber of horrors presided over by a pair of incestuous, serial killer siblings (Everett McGill and Wendy Robie). The twisted couple has also tried to raise a succession of kidnapped boys. Each botched effort is handled the same way -- the victim's eyes, ears and tongues are removed, and he's sent to live in the sealed-off basement, where a colony of similarly deformed "brothers" resides. Fool is able to avoid the evil lovers as he moves through the house's maze of hidden passageways. He discovers that the occupants have a daughter, Alice (A.J. Langer), who has survived their abuse, so he rescues her and they attempt to free the "people under the stairs." Adams, who made his feature debut with in film, was familiar to viewers as the star of rock singer Michael Jackson's Moonwalker (1988). ~ Karl Williams, Rovi

Critic Reviews for The People Under The Stairs

A pretense of social responsibility and most of the necessary tension get lost in a combination of excessive gore and over-the-top perfs in The People Under the Stairs.

There are a few push-button frights, but a total dearth of mind-disturbing terror; the humour, too, is broad, crowd-pleasing stuff.

Though the new movie has its share of blood and gore, it is mostly creepy and, considering the bizarre circumstances, surprisingly funny.

Craven has been directing downhill since his terror triptych of "Last House on the Left," "The Hills Have Eyes" and the original "Nightmare on Elm Street," so it's hardly surprising that he hits bottom with "The People Under the Stairs."

If there were truth in advertising, The People Under the Stairs would be called The Not Very Scary Movie Set Inside a Grungy, Badly Lit House.

Easily one of the Wes Craven's most original, deranged, and off the wall films.

...a decent premise that's employed to pervasively (and increasingly) unwatchable effect by Craven...

The everyday and mundane that lures us into a false sense of security can become the very sight of anxiety. [Wes Craven]... does so with a certain complexity and I think his sleepers don't get the attention they deserve.

The film turns America's obsession with child abuse to humorous and gothic effect.

A parable of underclass exploitation that ends in revolution and extreme -- even explosive -- wealth redistribution.

Or The Script Under the Coffee Cup... As with most Craven images, this one suffers from lackluster performances, a clumsy screenplay, a campy tone, and a noticeable lack of suspense.

Audience Reviews for The People Under The Stairs

Like a neophyte, blunderbuss George Romero, Wes Craven often merged social commentary into his macabre tales. The difference is Romero never forgot to also be suspenseful and not veer to far from the intent of terror. In the frustratingly dawdling horror-comedy People Under The Stairs, he deconstructs the Reagan-Era fantasy of the nuclear family with Everett McGill and Wendy Robie as facsimiles of Ronald and Nancy (especially disciplinarian McGill's oil-slick black hair). It's a bit of a muddled stretch (with night-vision air raid footage from the Persian Gulf) but Craven is more incisive with the racial gentrification and ghettoized motif. It's Stygian circumstances that coerce the main character to align himself with Leroy (Ving Rhames). It might seem incendiary to postulate that because the characters are black, they are disregarded by the landlord and verging on eviction, but there is a ring of truth to Craven's urban portrait in the vein of Spike Lee. It's a skin-crawling anti-yuppie nightmare with the minorities literally being enslaved by the WASP-y blue-bloods. One of my pet peeves is overly resourceful, feisty children and Brandon Adams' jive-talking Poindexter "Fool" Williams is a nuisance with the attitude of a miniaturized Richard Roundtree. For his role, Craven manipulates us with the ill-advised child-in-peril ploy but "Daddy" and "Mommy" are bumbling ignoramuses for the most part so they barely pose a threat since they don't eliminate him when they have a chance. Meanwhile, Everett and Robie are the possibly incestuous showstoppers. In his introduction, Everett is gnashing on a mound of meat while spitting out the buckshot shells which is suggestive of trespasser cannibalism. The gimp mask rampage is another gonzo set piece but the repetition with the Rottweiler chases rapidly wear thin our patience. The Treasure of the Sierra Madre quest is fatuous and once Rhames is ejected from the movie, it devolves into a geek show with another one of my debilitating issues: inbred, freakish cellar-dwellers who are secretly sidekicks to the protagonist (ex. The tongue-less Roach who prowls through the walls). The music sounds like low-grade Bernard Hermann reinterpreted for a Lifetime movie. Ving enlivens the film's booby-trapped first half ("Maybe the president will make me Secretary of Pussy") but his early departure bodes a glossy do-over of The Hills Have Eyes.

Leroy: Nice to see the rich folks' got rats too. "In every neighborhood there's one house adults whisper about and children cross the street to avoid." The People Under the Stairs is a classic 90's horror film from Wes Craven. Craven has made some of the best horror films and some of the lousiest, and The People Under the Stairs belongs to neither of these categories. It's not great, with weak acting and a real lack of anything scary, but it's definitely not bad. The story is a good one and Craven's direction and pace is strong. Also there's a lot of social commentary thrown into the plot as well, which always is good as long as the content works. A young kid named Fool and is family are in trouble. His mother is really sick and they're about to be evicted from their apartment. When an older gentleman named Leroy asks Fool to be the third person on his team, which is planning to break into the landlords house where a big stash of gold coins are supposed to be and steal them, Fool is apprehensive, but ultimately his families problems force him to do so. When they get into the house, it's not what they expected. Not only are the landlords crazy, but they have a bunch of prisoners locked up in the cellar. This is a fun little movie. It's one of those horror movies that you know is a product of the nineties, with the campiness of the villains and the ghetto setting. The movie has an interesting premise that the rest of the movie is able to live up to and that's saying something for the genre. Most of the time with horror films of this type, the premise is interesting, but the movie falls apart after twenty minutes. That isn't the case here. If you're a fan of horror films and Wes Craven, this one is worth a look. It's no Nightmare on Elm Street or Scream, but it's a nice, solid addition to Craven's filmography. Don't go into it expecting anything special and you should enjoy yourself. I know that I did and I honestly wasn't expecting to.

The films of Wes Craven have proven to be all over the place in terms of quality over the years, but this one falls on the more positive side of things...and it's quite a doozy too. After being threatened with eviction from their rundown tenement, a young teen named Fool decides, along with a couple of thugs, to rob the mansion where their landlord lives. The place is rumored to contain a fortune in gold, but once the trio break in, they find far more than they bargained for, and soon realize that maybe they should have just dealt with the eviction instead. This film, while it has shades of movies like The Hills Have Eyes, The Texas Chainsaw Massacre, and even Home Alone, proves to be quite original. It's definitely uneven, and has a really long and drawn out conclusion that begins to get really overstuffed, but, if you're in the mood for something wild, off the wall, and twisted, this might be the film for you. If you can tap into the film's groove, you might have a good time. It's definitely over the top and ridiculous, but the less you know about it going in, the better and more effective it is. It's not really scary per se, but it actually does have a few moments of genuine tension and suspense. There's bits of dark humor here and there, butI wouldn't call it a full on horror comedy. Brandon Adams, also known for his work in the Mighty Ducks series, is prretty good here. He's rather compelling as a kid caught up in a horrifying and surreal situation. Ving Rhames is also pretty good as Leroy, one of the thugs that Fool goes along with. Everett McGill and Wendy Robie are deliciously demented as the main antagonists. Yeah, the film is a little rough, but it has some fun ideas, it's pretty engrossing, and even though it's quite nuts, it's worth a look.

The People Under The Stairs is a drastic change of direction for director Wes Craven. Craven known for some of the most famous films in the genre, crafts a film that is eccentric, bizarre and off the wall. With The People Under The Stairs, he creates a totally different horror film. The film, I would say is good, but it doesn't deliver the stunning shocks that Craven has delivered in previous works. Despite the somewhat zany story, Wes Craven manages to pull out a few good jolts out of this unusual horror yarn. The film isn't one Craven's best, but it definitely isn't his worst. The film is marred with mildly effective humor, but at times it falls flat. The People Under The Stairs is still a decent enough horror film, and is fairly creepy for the most part. The talent involved in this film is really what makes this film a must see for Craven fans. Even if The People Under The Stairs isn't Craven's strongest offering, the cast make the film worthwhile viewing. Everett McGill and Wendy Robie, and terrific as the films villains, and they really make this film a must see. Even if it's not perfect, The People Under The Stairs is still a good horror film that Craven fans will most likely enjoy. I really enjoyed the change of direction of this Craven offering, and for the most part, it succeeds at being entertaining, even if it's flawed. But in the end, you have to admire Wes Craven's knack for trying something different. A good horror film with plenty of strange, eccentric moments.

The People Under The Stairs Quotes