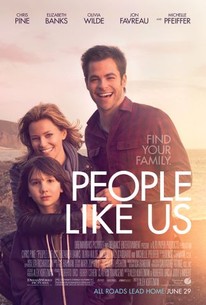 Critics Consensus: Though calculated and melodramatic, People Like Us benefits from a pair of solid leads and its rare screenplay that caters to adult filmgoers.

Critics Consensus: Though calculated and melodramatic, People Like Us benefits from a pair of solid leads and its rare screenplay that caters to adult filmgoers.

Critic Consensus: Though calculated and melodramatic, People Like Us benefits from a pair of solid leads and its rare screenplay that caters to adult filmgoers.

From DreamWorks Pictures comes People Like Us, a drama/comedy about family, inspired by true events, starring Chris Pine as Sam, a twenty-something, fast-talking salesman, whose latest deal collapses on the day he learns that his father has suddenly died. Against his wishes, Sam is called home, where he must put his father's estate in order and reconnect with his estranged family. In the course of fulfilling his father's last wishes, Sam uncovers a startling secret that turns his entire world upside down: He has a 30-year-old sister Frankie whom he never knew about (Elizabeth Banks). As their relationship develops, Sam is forced to rethink everything he thought he knew about his family-and re-examine his own life choices in the process. -- (C) Dreamworks

It seems ridiculous to dance around plot details when the movie allows the audience to get ahead of the story and to stay there as events laboriously unfold.

It's encouraging to see a wielder of studio heft test his mettle with the all-too-human. In a season of superheroes and their nemeses, Kurtzman takes on characters hurting, hoping, trying to rise to the occasion of family.

People Like Us seems to have been devised for audiences who want to experience an entire year's worth of soap opera complications in a single sitting.

Some of the strongest writing in any movie so far this year.

As if the film's overblown poster art wasn't enough to clue you in, this is pure cornball crookery.

Beneath the prolonged stares and hammy piano score lies an enjoyable, emotive drama.

Still, this is a film worth seeing and pondering the lifelong effect of parental decisions or indecisions on their children. At the root of everything is forgiveness and an ability to just get on with it.

An insignificant film without personality. [Full review in Spanish]

The movie is an appeal to the most general audience possible, lacking the necessary spark to find the right audience.

This all could have been resolved with a single conversation.

Starts off decently, but turns into sentimental, hard to believe fluff by the end.

An unapologetic chick flick with all the trimmings, but at least done with some intelligence, and with some respect for their audience. The story of how two families come to discover they've the same father is not overly convoluted, which is to say, simple, but the performances of the leads are committed enough to carry the day.

People Like Us was a good movie with a great cast. The story was really good. I loved that Sam started out self absorbed to by the end being so open and loving. His mother and father really did a number on him. She is where I think he got his selfish ways. The fact that she made her husband give up a relationship and any kind of connection with his daughter really made me dislike her. I loved Pine and Banks together on screen. They flowed well together making is very easy to believe they had a close connection. I think Michael Hall did a great job in this. He held his own with these actors. I look forward to see how he does in future films. The ending was really sweet. It couldn't have ended in an any better way. It is a great family drama. I will definitely be seeing this again.

This has to be under everyone's radar and that's a true shame. I can't recommend it enough if you're looking for a truly moving film about fractured families and fractured souls. I was completely blown away by this movie and by every single performance. If I were an Academy member and I saw this film I would immediately place the names Chris Pine, Elizabeth Banks and Michelle Pfeiffer at the very top of my Oscar nominations lists. Honestly, everyone is just that good in these roles especially Banks. Hers is the best performance I've seen this year bar none. The movie itself is so wonderfully written and packs true emotional resonance. The plot may sound cliché but nothing is handled in a predictable or unreal fashion. Secrets are revealed and it sheds new life on family and the meaning of love. To paraphrase: what seems important now really isn't and what's may seem not important now really is... there's a lot to digest about this film. One thing's for sure, if you "lean in to it" and give this movie your time and undivided attention you will not be sorry that you saw it. 5 Stars 2-7-13