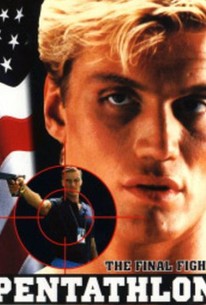 In this action-adventure drama, Eric Brogar (Dolph Lundgren) is a world-class athlete from East Germany who joins his nation's Olympic Team for the 1988 Summer Games in Seoul, Korea. However, despite his gifts, Eric is constantly brow-beaten by his brutal coach, Mueller (David Soul), and in time Eric begins to question his nation's politics as well as his own participation in the games. Reaching the end of his rope, Eric defects to the United States, though as he runs from the East German team, Mueller gives chase and injures the star athlete's leg. Eric arrives in the United States an emotionally broken man, and it takes some time before his body and soul have healed and he's ready to begin training again. However, Mueller isn't about to forget what he believes was an unthinkable betrayal, and he comes to America to track down Eric and stop his career comeback before it can start. Pentathlon also features Roger E. Mosley and Bruce Malmuth.

Anthony Pennello
as Cop No. 1

There are no critic reviews yet for Pentathlon. Keep checking Rotten Tomatoes for updates!

There are no featured reviews for Pentathlon at this time.