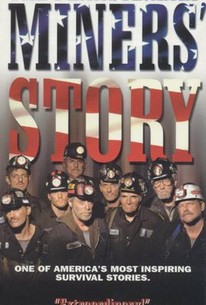 In July of 2002, nine men were trapped 240 feet below the ground in a Somerset, PA, coal mine. For the next 77 hours, the attention of a war-beleaguered and economically strapped America was focused upon the rescue efforts, despairing along with the miners' families when the shaft began to fill up with water. Although everyone in the U.S. knows the outcome of the story, this made-for-TV movie manages to sustain a respectable level of suspense, expertly shifting dramatic focus from the entombed miners to the rescuers on the surface and back again. Curiously, the film's climax is inconclusive, as if the film had been made during the crisis rather than several months afterward. Originally titled The Miners' Tale and adapted for television by novelist Elwood Reid from the miners' bestselling joint autobiography, The Pennsylvania Miners' Story premiered November 24, 2002, on ABC.

Tweaking emotions is a fragile pastime, and there's a thin line between "tribute" and "mawkish."

There are no featured reviews for The Pennsylvania Miners' Story at this time.