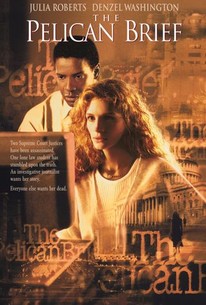 Critics Consensus: Julia Roberts and Denzel Washington are a compelling team in the overlong Pelican Brief, a pulpy thriller that doesn't quite justify the intellectual remove of Alan J. Pakula's direction.

Critics Consensus: Julia Roberts and Denzel Washington are a compelling team in the overlong Pelican Brief, a pulpy thriller that doesn't quite justify the intellectual remove of Alan J. Pakula's direction.

Critic Consensus: Julia Roberts and Denzel Washington are a compelling team in the overlong Pelican Brief, a pulpy thriller that doesn't quite justify the intellectual remove of Alan J. Pakula's direction.

Embroiled in an affair with Thomas Callahan (Sam Shephard), her alcoholic professor, precocious 24-year-old Tulane University law student Darby Shaw (Julia Roberts) writes up an insightful theory about the recent murder of two Supreme Court justices, one of whom, Abraham Rosenberg (Hume Cronyn), served as Callahan's mentor. When Callahan shares this so-called "Pelican Brief" with buddy Gavin Verheek (John Heard), an FBI lawyer, the document makes its way to White House flack Fletcher Coal (Tony Goldwyn), who believes it could topple the current administration. When Callahan is murdered and the President (Robert Culp) convinces the FBI to hold off on investigating Darby's theory, the resourceful student must go into hiding, stalked by relentless assassin Khamel (Stanley Tucci). Her only hope of escaping Callahan's fate and proving her theory lies in Washington investigative reporter Gray Grantham (Denzel Washington), who's already had one confidential source back out of sharing information about the assassinations. This John Grisham adaptation is generally faithful to the best-selling novel. Fans of HBO's Sex and the City will notice one of its future stars, Cynthia Nixon, in a small role as one of Darby's New Orleans classmates. ~ Brian J. Dillard, Rovi

Robert Culp
as The President

Edwin Newman
as Himself

Magee Hickey
as Herself

James B. Sikking
as FBI Director Denton Voyles
View All

Critic Reviews for The Pelican Brief

Pakula's always had a cool style, tending toward solemnity, but let's face it, All the President's Men this movie is not. You wish he'd have a little more fun with the pulpy material.

It's too bad that Pakula allows this 1993 movie to dawdle after its climax, but prior to that he's adept at suggesting unseen menace and keeping things in motion.

Pakula has improved on Grisham's book by excising much of the detritus, crafting a taut, intelligent thriller that succeeds on almost every level.

An old hand at this sort of thing, Pakula goes through the motions, but not much more.

As the film piles on shovelfuls of further exposition, Mr. Washington and Ms. Roberts are left to look terrific and recite perfunctory lines.

A brightly wrapped, ketchup-drenched mush-burger, it slides down the Zeitgeist esophagus like a slippery McPelican. You pay, you swallow, you drive home. You're left with nothing except, possibly, heartburn.

Not on par with Alan J. Pakula's preeminent paranoid cinema. But depicting a POTUS at odds with his FBI director and creating obstruction of justice concerns aligns it with Pakula's other preternaturally predictive potboilers.

Both Roberts, with her intense fragility, and Washington, with his thoughtful heroism, prove invaluable in pulling us into the heart of the film.

It all sounds thrilling enough. So why is it so dull? Chiefly because of a central flaw in Grisham's writing, which Hollywood is unable to smooth out -- its grinding pedantry.

A routine thriller, curiosuly disappointing from Alan Pakula that even stars like Denzel Washington and Julia Roberts can't rescue

Audience Reviews for The Pelican Brief

With so much happening on screen for a bloated running time of 141 minutes, it is easy to overlook the countless inconsistencies and stupidities of this half-baked conspiracy thriller that believes to be pretty clever but is filled with paper-thin characters who rarely behave smartly.

Not all that enthralling. Probably only of interest to Julia Roberts fans. Over long and hard to follow (or maybe just my attention kept drifting off). Wanted to like it, but just a bit dull.

Made somewhere around the start of the mid-90's legal thriller craze (and most of those films were from John Grisham novels) The Pelican Brief is a film about a young law student's theory about the assassinations of two Supreme Court justices...and it just happens to actually be true. The paper reaches the president through a chain starting with her law professor - who she's also sleeping with - and uncovers a conspiracy involving the chief executive. Thus, the government does anything and everything to kill her, including murdering everyone she comes in contact with. Also coming into play in this is Denzel Washington, a Washington newspaper reporter who agrees to meet with her and becomes involved, no doubt because of the incredible attention and readership it would bring to him. The acting is superb, shifting from drama to action film almost effortlessly. I don't normally go for legal thrillers all that much, but this one is an exception to the rule.

A very good political conspiracy thriller with an outstanding cast. Based on the John Grisham novel. This is a entertaining film with a deep plot, it can be a little slow at times and light on action but overall an enjoyable well made film.