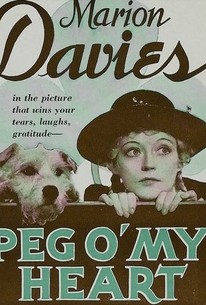 The evergreen Laurette Taylor stage vehicle +Peg O' My Heart was the basis for this Marion Davies picture. 36-year-old Davies plays a twentysomething Irish colleen who inherits a large sum of money from her grandfather. To collect the legacy, she must leave her beloved Pa (J. Farrell McDonald) and live in England for three years. Hoydenish Davies raises a ruckus in her staid family mansion, meanwhile falling in love with handsome young Onslow Stevens. It is Stevens who tells Davies that her father, who'd pretended to be dead so that she wouldn't return from England before the three years were up, is actually alive. Renouncing her inheritance, Davies returns to Pa, with Stevens not far behind. A silent version of Peg O' My Heart, with Laurette Taylor recreating her stage role, was filmed in 1923.

There are no critic reviews yet for Peg o' My Heart. Keep checking Rotten Tomatoes for updates!

There are no featured audience reviews yet. Click the link below to see what others say about Peg o' My Heart!