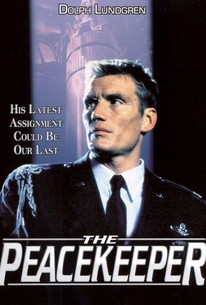 This well-wrought Canadian direct-to-video actioner (in large part a knock-off of the Die Hard series) stars Dolph Lundgren as a maverick American Air Force pilot who during a flight disobeys orders and drops a large shipment of food for a starving group of Middle Eastern refugees. Too embarrassed by the publicity to discipline him formally, the Air Force gives him a new assignment: he is to carry the President's black bag, a special briefcase loaded with a computer that the Executive in Chief can use to launch a nuclear war. Following a press conference, the former pilot and the president (Roy Scheider) return to their hotel. Later, the floor on which they stay is overrun by terrorists who want to use the black bag to launch an attack on Washington D.C. During the scuffle, the pilot manages to escape, but not before the bag is grabbed by the terrorists. Later the hostage takers demand that the President commit suicide on television. If he refuses, then they will blow up the capitol city. Assisted by the only other man to survive the terrorist's initial attack, the pilot must somehow stop them.

Roy Scheider
as The President

Serge Houde
as Secretary of Defense

Critic Reviews for The Peacekeeper

There are no critic reviews yet for The Peacekeeper. Keep checking Rotten Tomatoes for updates!

Audience Reviews for The Peacekeeper

Featuring the "acting" talents of the statuesque Mr Lundgren, the intrusive anti-nukes message pushed in the unsuspecting viewer's face may have been more convincing had it not appeared in a show me the money B movie action flick.

I remember watching this movie a while ago and in my opinion it is a typical Dolph Lundgren action movie, nothing very special about it. The story is about a nuclear weapon that is targetet on the US. Thre's only one man capable of stopping this attempt and its the socalled peacekeeper. This movie is thrilling and has a lot of good action scenes where Lundgren shows what he's worth. If you're looking for an action-packed thriller, this movie would probably be a good choice. I thought it was ok.