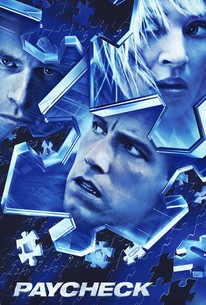 Critics Consensus: Though Dick's short story has an intriguing premise, Woo reduces it to a lot of meaningless chases, shoot-outs, and explosions.

Critics Consensus: Though Dick's short story has an intriguing premise, Woo reduces it to a lot of meaningless chases, shoot-outs, and explosions.

Critic Consensus: Though Dick's short story has an intriguing premise, Woo reduces it to a lot of meaningless chases, shoot-outs, and explosions.

Brilliant computer engineer Michael Jennings routinely has his short term memory erased, so he can't divulge any information about the top secret projects he works on throughout the year. For his most recent gig, he expects to receive over four billion dollars. Upon completion of the job, however, Jennings is given a filled envelope--not with a check for his billions, but containing random objects. It is communicated to him that he had agreed to forfeit his payment for this specific project. With his memory erased, the meticulous engineer attempts to use the objects in the envelope to figure out what happened to him in his now obscured past. Soon, federal agents are after Jennings and he teams up with his old flame, Rachel, who helps him uncover the mystery of his past--and the question behind why the people whom he once worked for, now want him dead.

Why Some Philip K. Dick Adaptations Work (And Others Are Total Disasters)
A Taste of What’s "Next" for Nicolas Cage
Paul Giamatti to Star as Philip K. Dick

A rubbish script, terrible acting from all concerned -- including, I regret to say, Uma Thurman -- and Woo's action histrionics uneasily confined to science lab interiors, all conspire to produce a movie of utter redundancy.

There's a sense of treading water about this movie.

Without ever quite becoming boring, Paycheck seems to narrow into a routine pattern, and a plot that at first had nuance and the hint of a broader meaning degenerates into chases and standard action.

You may not buy everything about this movie, but you'll likely leave it with a smile.

Ben can't, however, make Paycheck into the good movie it might have been. That would have required a director more interested in ideas and less interested in things that go boom...

This movie just sags, even in the action scenes.

It's not necessarily high brow sci-fi, but it is very accessible to the mainstream eye.

Playful but inconsequential...the interpretation of Dick's intriguing concept is a street which mostly just dead-ends into noisy silliness. [Blu-ray]

Another classic Philip K. Dick story is brought to the big screen only this time its been 'Woo'd'. To be very very honest this is pretty much a poor mans 'Minority Report' with a bad cast, accept for the big chinned Eckhart, why this short story has not been given the same care as 'MR' I don't know. The film plays out with Affleck (yes -_-) as a 'reverse engineer' who...actually I still have no idea really what he is suppose to do in his role, all I know is it involves having his memory wiped after he's done each job but this time he has been used and set up by the evil Eckhart. Cue allot of running around, guns blazing everywhere, your typical Woo car/motorbike chase with standard silly slow motion stunts and of course your typical standard Woo point blank face off...or Mexican standoff. The concept for the film is pretty neat, not totally original in today's film world but it has promise, unfortunately like 'M.I.2' Woo was totally the wrong director for such a decent sci-fi story. The whole thing looks bad, especially during the finale which looks like its been filmed on a set from the 60's Batman TV show, plus the acting is poor and hammy from almost everyone. Its all too predictable and quite simply its been done allot better with other films.

Not a fan of Ben Affleck or Uma Thurman at all but what I saw was ok. I like the twists and turns as I tried to figure out what had happened to him. At times it felt rather slow and lethargic which ruined the atmosphere. Not something I'd watch again but a good watch for anyone interested in Philip K. Dick and time travel stories.

'Paycheck' is a film that simply does not know what it is and simply doesn't care. I say that because despite a promising premise, the audience has no idea what is going on through this cluttered mess of a film, and we just don't care at all for the protagonist, played well but unmotivated by an aging Affleck. I guess if you are into these weird, retroactive and hip films, then go ahead. If you are apart of a mainstream audience, rent Dogma, Affleck's better film.

I had a hard time giving this the rating that I felt it deserved. There ARE some things going for this film. A nice diverse cast of people I generally like and admire, the screenplay was based off of a short story by Phillip K. Dick, there are parts of the score that I really enjoyed, and finally, there were some decent action set pieces and moments. The latter being nothing on the scale of Woo's previous action masterpieces, but pulled off pretty well making for some somewhat exciting moments. However, it all seems to go wrong. The plot itself is just barely coherent (if at all) and the acting from the two main headliners is, well, pretty bad. Affleck is notorious for being a bad actor, but I don't think that's entirely fair. He's not an altogether terrible actor because if he's given the right part with proper direction, he can turn in good performances. This is not the case with this film, however. I really wanted to like this. I found it really cheap at a dirt mall and was looking forward to seeing it once I got it home, but unfortunately it turns out to be a letdown. So what I think I'll do is be thankful that I didn't pay much for it and immediately have a back-to-back double feature of Blade Runner and Hard Boiled (just to remember that Dick's stories CAN be made possible and John Woo CAN make great action films).