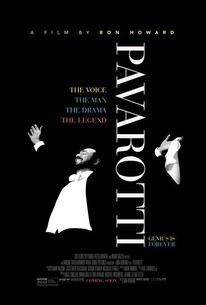 Critics Consensus: Pavarotti pays entertaining tribute to a towering cultural figure with a documentary whose evident affection for its subject proves contagious.

Critics Consensus: Pavarotti pays entertaining tribute to a towering cultural figure with a documentary whose evident affection for its subject proves contagious.

Critic Consensus: Pavarotti pays entertaining tribute to a towering cultural figure with a documentary whose evident affection for its subject proves contagious.

From the filmmaking team behind the highly-acclaimed documentary The Beatles: Eight Days A Week - The Touring Years, PAVAROTTI is a riveting film that lifts the curtain on the icon who brought opera to the people. Academy Award (R) winner Ron Howard puts audiences front row center for an exploration of The Voice...The Man...The Legend. Luciano Pavarotti gave his life to the music and a voice to the world. This cinematic event features history-making performances and intimate interviews, including never-before-seen footage and cutting-edge Dolby Atmos technology.

Director Ron Howard knows how to make it emotional and appealing, to make us love the man as well as the extraordinary voice, as he skims the surface of a grand life and career.

Those who want their image of Pavarotti left intact will enjoy the film; others will feel that a chance to put the record straight has been evaded.

See it, if for no other reason than to learn the significance of his characteristic white hankie.

"Pavarotti" paints a simple picture of a complicated man, but it hits the high notes: the performances, the cheers, the adulation. Consider it a greatest hits.

It's an engaging film, filled with vintage snapshots, interviews with friends and former colleagues, and, most of all, that marvelously distinctive voice, with all the emotion it could convey.

A lyrical scale that Ron Howard harmonizes to the greater glory of Luciano Pavarotti. [Full Review in Spanish]

For those faithful to the church of Pavarotti. [Full review in Spanish]

Howard's been a highly skilled storyteller for a long time now, and he knows how to flesh out a theme.

I walked out of this movie feeling good, which I think is the gift Pavarotti returned to everyone.

There are no featured reviews for Pavarotti at this time.