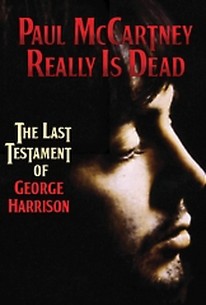 In the summer of 2005, a package arrived from London with no return address. Inside were two mini-cassette audio tapes dated December 30, 1999 and labeled THE LAST TESTAMENT OF GEORGE HARRISON. A voice identical to Harrison tells a shocking story: Paul McCartney was killed in a car crash in November of 1966 and replaced with a double! However, the remaining Beatles tried to signal fans with clues on album covers and in songs.

There are no critic reviews yet for Paul McCartney Really Is Dead: The Last Testament of George Harrison. Keep checking Rotten Tomatoes for updates!

Yup, not even worth reviewing.