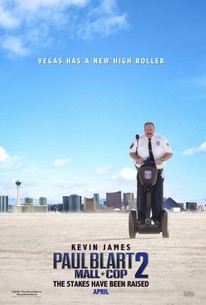 After six years of keeping our malls safe, Paul Blart has earned a well-deserved vacation. He heads to Vegas with his teenage daughter before she heads off to college. But safety never takes a holiday and when duty calls, Blart answers. (C) Sony

Steve Wynn
as Himself

Andrea Wynn
as Herself

Deven May
as Casino Security

LaToya Tonodeo
as Lady in Casino

Although there have been worse sequels -- and worse overall movies -- make no mistake, that's hardly a recommendation.

There are mediocre films, and then there are films like Paul Blart: Mall Cop 2, where the mediocrity is more or less the point.

Maybe Paul Blart isn't spoofing John McClane after all; maybe these movies are actually too stupid to realize what they're imitating.

Paul Blart: Mall Cop 2 may be forgettable, but it's difficult to truly dislike.

A movie whose chuckles (six, I counted) are outnumbered by helicopter shots of the Wynn resort in Las Vegas.

In a nutshell, James prat-falls his way through a script that blithely believes it is clever. It is not; it is the epitome of lazy writing and base characterization.

There is absolutely no reason for its existence, and I wish I could somehow get my 90 minutes back.

Unless you've been mixing your medications, your resistance to Mr Blart's charms should hold for at least the rest of your life.

People laughing at fat men isn't new, but it's never felt as old as in Paul Blart: Mall Cop 2.

This follow-up to the 2009 original is even more terminally dumb and dopey, with co-writer, co-producer and star Kevin James hamming it up horribly.

As expected, all the humour involves his bumping into things and falling over because he's fat, which is apparently hilarious.

I mean what is there to really say? It is what it is. In the never ending vein of comedy sequels, one that is not warranted will always be in the mix. This time, "Paul Blart: Mall Cop 2" ladies and gentlemen. Kevin James once again proves why he is just an unlikable actor. Sure, he has had a few hits and/or decent performances, but when he continues to lead films like this, it only furthers his downward spiral. This time, Pul Blart is invited to a convention in Las Vegas, where he is lead to believe he will be receiving an award. Like every other cliche in the movie, of course a conflict had to happen. Paul Blart becomes the hero taking down bad guys again, and it is as unfunny as it is unnecessary. This film defines why we no longer need sequels to comedies, especially ones that never worked in the first place. There is not much to say about this picture really. It's script is horribly lazy, it's direction is un-inspired, and the comedy is slim to none. There is a forced attempt to make you care about the father daughter relationship, but it keeps going back and forth to the point that I didn't care. In the end, you know exactly what to expect going in, nothing good.

"Always bet on Blart!" Even worse than the original, Paul Blart: Mall Cop 2 is a clichéd and formulaic screwball comedy that doesn't deliver any laughs. Starting with an immediately reversal of the happy ending from the last film by having his wife divorce him in the prolog (which is a horrible way to begin), Paul Blart is now a has been whose 15 minutes of fame has past; but he's forced to taken on a gang of thieves once again, while attending a security convention in Las Vegas, when his daughter is taken hostage. The writing is incredibly awful; featuring cheesy character stereotypes and horrendous dialog. And Kevin James seems to be phoning in his performance, and doesn't have any charm. In fact, none of the performances are any good. Also, the sketch comedy and slapstick comes off as extremely lame. Paul Bart: Mall Cop 2 is an atrocious film, and what happens in Vegas should stay in Vegas.

I guess it was inevitable that we would see a sequel, the first movie was quite good fun I can't deny, unsure how well it did but most things get sequels these days. Hell I'm sure there will be a third too, because all the bigwigs like to make trilogies, its great for DVD sales. But yeah...I did like the first movie somewhat, it was a reasonable idea, a mall cop thinking he's a real cop, trying to be a real cop, it worked on some levels. The main pull for this franchise was/is of course Kevin James who uses his weight to gain laughs lets not beat around the bush. Admittedly I am a fan of the guy to a degree (said it before and I'll say it again), I think he's enjoyable, fun and effective with his physical gags, plus he's a good everyman that we the audience can relate too. Unfortunately he does seem to have had more success on TV than the big screen, and he's not helping himself here. This movie is virtually the same shit that we saw in the first movie. Blart and his daughter go to a security convention in Vegas, low and behold at the exact same time a group of criminals are planning to steal all the valuable paintings from the same hotel Blart is staying in. Just like the first movie Blart blunders into the crime caper and ends up stopping it in his usual clumsy overweight manner, spoiler alert! he manages it. Oh...would a Las Vegas hotel have the Van Gogh Sunflowers painting in it? Yep its the same as the first movie yet somehow its much worse, probably because its a babyish infantile pile of crap this time around. Seriously, the last movie has some good moments of sarcastic humour, this has nothing, its completely void of anything that would make an adult or child smile. Its bizarre, there literately isn't anything funny at all! not a single moment that made me smile. Hell there aren't any actual jokes! it pretty much consists of James making stupid faces (that aren't funny faces) and mincing around trying to be funny. What I really don't get is the franchises obsession with those Segway things, seriously there is an entire scene dedicated to trying to make out those things are funny. I realise its Blart's little trademark and part of his character but it isn't funny! watching him trying to show off on one isn't funny, its just lame. Everything else is completely predictable throwaway spiel we've seen a shitzillion times before. Blart's daughter is fat just like him, she falls for a good looking guy who is clearly out of her league and Blart doesn't like it, the main baddie looks like a Bond villain, the baddie henchmen are a standard bunch with a token black guy and token sexy females, the hotels security is headed by some uber sexy male hothead and the hotels general manager is a sexy supermodel type. The only thing they add here which had promise and showed some ingenuity, was the little gang of security officers that meet with Blart for the convention. A ragtag team of misfits that really shouldn't be in security...but are, clearly for reasons other than actual security. James older brother Gary Valentine stars in this as one of the aging, fat, balding security guards in this little gang. Again clearly meant to be a hilarious addition...but it isn't. The whole security convention aspect could of been a winner, they did the same silly thing in the US TV version of 'The Office' with an office supply convention. Seeing that episode shows how funny this movie could have been in the right hands, even with James, the material was there (albeit a little bit of good material) but its been wasted. That one small idea does not make up an entire movie of course, and as already explained there is nothing else here of value. Even the apparent suspenseful finale where Blart takes down the bad guys is pathetic and not even up to the meager standards of the first movie! This could have been better with a slight adult edge, it was never gonna be great but it could of been better, but its not, its pretty darn terrible.