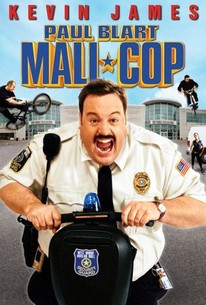 Critics Consensus: Paul Blart: Mall Cop has some laughs, but its plot is flimsy and lacking in any sustained comic momentum.

Critics Consensus: Paul Blart: Mall Cop has some laughs, but its plot is flimsy and lacking in any sustained comic momentum.

Critic Consensus: Paul Blart: Mall Cop has some laughs, but its plot is flimsy and lacking in any sustained comic momentum.

A New Jersey rent-a-cop gets his moment to shine as the holidays approach and Santa's little helpers stage a coup at the local shopping mall in this comedy starring King of Queens' Kevin James. Paul Blart (James) is a single suburban dad attempting to make ends meet by working as a mall security guard. Paul takes his job very seriously; unfortunately the same can't be said for the shoppers he deals with on a daily basis. That all changes the day that Santa's little helpers shut down the mall and start taking hostages, including Paul's daughter and his main squeeze. Realizing that no one knows the mall better than the man who's paid to guard it, Paul mounts his Segway and speeds to the rescue. ~ Jason Buchanan, Rovi

Jamal Mixon
as Leon
View All

In places the plot sags a bit and some jokes don't quite hit their mark or tickle the funny bone as much as they're obviously meant to.

James makes a funny, likeable doofus, and the expansion of his girth since his hit sitcom The King of Queens is used to great comic effect.

This isn't brain surgery; this is daffy entertainment that plays to its strengths, with director Steve Carr trusting in James' deadpan earnesty

Once you've seen about the first 20 minutes of the movie, you've got a sense of what all of the jokes were going to be.

But it's not meant to be deep - it's intended as an easy-going laugh-fest and on that front it succeeds thanks exclusively to Kevin James's energetic performance.

Save for its dalliance with the everyman action movie, there's no surprises in Paul Blart: Mall Cop, another largely listless comedy from Sandler's Happy Madison production company.

James is much better than a lot of his contemporaries at this, eschewing over-the-top clowning for actual humanity. But it all gets thrown out the window in the second half. Maybe he'll do better next time.

Neither good enough to to really cheer for nor bad enough to really care about trashing it, it exists in that room-temperature middle where nothing feels like it matters.

Doesn't offer anything new but it is an ample addition to the comedy genre, and after a mostly rip-roaring 91 minutes, you'll understand how the film did so well in America.

I liked this, sure its very childish, predictable, cheesy and we've seen it all before but its still humorous and doesn't take itself seriously (of course), so hey...what the hell. James makes it funny, simple, I like Kevin James ('King of Queens') a lot. Like John Candy, John Belushi and Chris Farley his size gives his light-hearted, visual comedy skills a mega boost. He's a nice guy, easy going, makes you feel happy and comfortable with his average guy, blue collar persona. The plot is utter trash, very stupid, a total 'Die Hard' parody in the second half (almost a spoof) which at times becomes a bit too close to serious and not funny. The whole hostage idea kinda spoils the comedy side of things, it should of remained just a 'Dumb n Dumber' style comedy to the very end. It all gets a bit moody and at times a tad dark, the movie forgets what its suppose to be here and there, methinks. The whole concept at the start is funny, a mall cop who thinks he's a real cop in a mall, the scene where Blart stops an OAP in a buggy is brilliant, best scene, other things are very babyish eg. prat falls and drunk tomfoolery etc..That angle does lower the tone when it could of been a great 'Dodgeball' style adult comedy. A slight shame because it could of been a solid classic spoof/parody comedy. Nevertheless its still a reasonably fun little film, good time if your with your mates...possibly a bit tipsy.

[img]http://images.rottentomatoes.com/images/user/icons/icon14.gif[/img] Kevin James' commitment to the roll and its funniest moments are enough to enjoy this charming, silly film.

I was not at all interested in this film and saw it only by chance; however It was not as bad as I was anticipating though. It's obviously that silly slapstick style of comedy, but I found myself intrigued enough to want to see how the ending pans out.

Paul Blart: You touch them; I swear I'll end you. "Safety Never Takes a Holiday" I'm not going to argue that Paul Blart is a good movie because it isn't. It's a stupid family movie. With that said, I enjoy it. There is something extremely likable about Paul; no matter how stupid a character he is. I like watching Kevin James even when his movies are horrible and I guess that means all of his movies. It appears like he's having a lot of fun in the lead role and I can say I have fun watching him scooter his way around the mall.  I look at the movie as a spoof of Die Hard. In reality, this no more stupid then Die Hard was. Die Hard just had a way better villain in Alan Rickman, cool effects and of course Bruce Willis. But if you just look at the core story, it's pretty much the same thing; except in a mall instead of in a skyscraper. I'm not at all saying this is better then Die Hard; just a decent spoof of it.  I know I'm in the minority in liking this movie at all. I went in expecting a stupid hit and miss comedy and that's what I got. It was enjoyable enough.