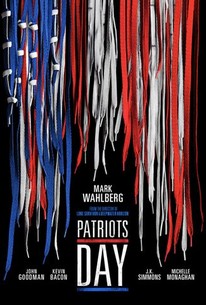 An account of the Boston Marathon bombing, PATRIOTS DAY is the powerful story of a community's courage in the face of terror. In the aftermath of an unspeakable attack, Police Sergeant Tommy Saunders (Mark Wahlberg) joins courageous survivors, first responders and investigators in a race against the clock to hunt down the bombers before they strike again. Weaving together the stories of Special Agent Richard DesLauriers (Kevin Bacon), Police Commissioner Ed Davis (John Goodman), Sergeant Jeffrey Pugliese (J.K. Simmons) and nurse Carol Saunders (Michelle Monaghan) this visceral and unflinching chronicle captures the suspense of one of the most sophisticated manhunts in law enforcement history and celebrates the strength of the people of Boston.

On DVD This Week: Fantastic Beasts and Where to Find Them, Silence, Planet Earth II, and More
Pete’s Dragon, The Handmaiden, Iron Fist and More on Netflix and Amazon Prime This Week
Patriots Day and Silence Are Certified Fresh

It's not suspenseful so much as commemorative and even, in paying tribute to the resilient spirit of Boston and all of those caught up in this attack, celebratory. It's a kind of civic tribute.

This movie chronicles the hours before the bombing and the manhunt over the days afterwards, often in forensic detail, combining traditional crime-thriller drama with real CCTV, news and mobile phone footage.

The hard-drive details of the day's horror stay with you.

Patriots Day is stirring, well-acted, moving and built with conviction and flair.

The first half hour of Patriots Day is riveting.

Patriots Day is as flawed as it is phenomenal, an interesting experience worth checking out not just for the cinematic experience it produces, but for the conversations it can spark.

Patriots Day is an intense but respectful docudrama that serves as both a love letter to the city of Boston and a timely reminder of everyday citizens' undefeatable spirit.

Patriots Day is meant to honor the people and the city of Boston. Besides being a love letter to his hometown, Mark Wahlberg also gives us a solid performance in an exciting movie.

Patriots Day is a surprisingly steady retelling of a tragic event.

Patriots Day takes one of the biggest modern tragedies and plays it up as an over the top pat on the back to a fictional character instead of real people.

Intense, exciting and terrifying account of the 2013 Boston Marathon bombing and the hunt for the culprits in the days after. Even though the film sticks to the most important characters involved and follows events almost in the style of a documentary it does pack quite the emotional punch. Great cast and direction makes for a pretty emotional ride. Of course you gotta have the message of Bostonian unity in the end, but given the circumstances, that's quite alright.

Despite less-than-compelling performances and a lack of artistic perspective, "Patriot's Day" packs an emotional punch on a visceral level. I found the time spent watching the film was rewarding.

Berg & Wahlberg, once more, help shed light on a dark time in history. Patriots Day does well in depicting evenly the tragedy and drama behind the events from April 2013 while also highlighting the heart and captivating courage of those who were victims and those who responded; sending a heartfelt and respectful acknowledgment in the process. 4.5/5

True stories have been around on the big screen for a very long time. Some do poor job and overdo the sappiness of the events and others an impeccable job in capturing the essence of the story. Patriots Day represents the latter. While it's very hard to say you loved a film like this, I can say in confidence that this is a great film that pays tribute to this very touchy event. When I first heard this film was in development, I found myself worried, especially with the notion of Peter Berg directing. At one point, this career felt as though it was going in the route of Michael Bay, especially when he helmed the laughable Battleship. When Lone Survivor was unleashed unto the world, followed by 2016's Deepwater Horizon, it was clear that he had found his niche. Patriots Day is just as effective as it needs to be. On April 15th, 2013, two men entered the crowds surrounding the Boston Marathon. Setting off multiple bombs, resulting in death and dismemberment, along with emotional scars, this truly was an incredibly sad moment in recent history. Displaying these events on screen must have been very hard to plan out, but they made the proper decisions in the end. Cutting back and forth between the film, recreated security footage, and actual security footage of the event, the emotion was cranked up to eleven. Most films choose to have overblown action set pieces to make the true event more extravagant for the cinema, but Patriots Day is very classy about what is displayed on screen. There are certain things that the news chooses to leave out and while I did follow the news when this tragic event took place, I don't remember hearing about the aftermath, except for the fact that they found the two men. I had no idea that they shot police officers and threatened the lives of innocent civilians along the way. It should come as no surprise, given the fact that these men have to be crazy in general to even start something like this, but there were quite a few moments throughout this film that I wasn't expecting. Treating this story with care, this film slowly goes through every motion of the five day span that it took to capture these men. I highly commend the way this film showcased everything. When exploring such a tragic incident, a film needs to be able to keep its audience at ease. No, I'm pretty positive that there was no amount of comedy circling this event, but as far as films go, a bit of levity is needed, so it doesn't become overly depressing. Hiring actors and actresses like Mark Wahlberg, John Goodman, J.K. Simmons, Kevin Bacon, and Michelle Monaghan certifies that the film is going to everything it can to deliver this story in a caring way. Having said that, them also being the talent cast that they are, are able to provide a few chuckles for the audience, while still having their eyes well up with sadness. The emotion in Patriots Day is balanced wonderfully. In the end, Patriots Day is a very solid film that depicts the tragic events of the 2013 Boston Marathon bombings in a very classy way. Very much like Deepwater Horizon, it very precisely goes through the motions of the event and makes you care about each and every character. As far as story, there is no conceivable way that it can lack in story, due to the nature of the premise at hand, but it does feel more like a dramatization at time, rather than a Hollywood picture. There is something very stagey about this film that I just can't get out of my head. That bothered me throughout the duration, but there is no denying that the performers took this material very seriously and Peter Berg took great care in his direction here. Patriots Day is just about as perfect as you can get in putting this particular story on the big screen. Whether you are aware of the terrorism that went on this day in history or not, this is an important picture that I definitely recommend checking out. Very, very well made.