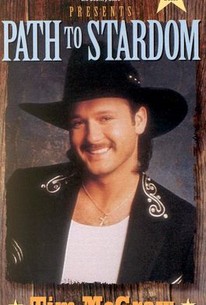 This program profiles the career of Tim McGraw, who was raised in Louisiana where he grew up listening to many types of music, including rock & roll and country. His country singing career didn't take off until after the release of his first single in 1992 entitled "Welcome to the Club." After that, he released his first album entitled Tim McGraw, followed by several singles that crossed over and shot up high on the pop charts. Those singles included "Indian Outlaw" and "Don't Take the Girl." McGraw's third album, entitled All I Want, went platinum, securing his performing career for many years to come.

Critic Reviews for Path to Stardom

There are no critic reviews yet for Path to Stardom. Keep checking Rotten Tomatoes for updates!

There are no featured reviews for Path to Stardom at this time.