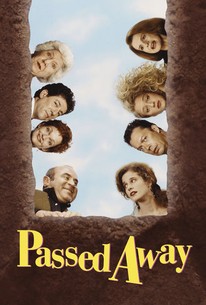 In this black comedy, elderly Jack Scanlan (Jack Warden) passes away just as he's about to tell his oldest son Johnny (Bob Hoskins) what he's decided is truly important in life, which does little to ease Johnny's mid-life anxieties. Jack's funeral and the subsequent wake brings together the various members of the Scanlan Family, most of whom are having troubles of their own. Johnny's mother Mary (Maureen Stapleton) is not dealing well with losing her husband. His brother Frank (William Petersen), a would-be union delegate, has a nagging wife, Denise (Debra Rush), and a pregnant daughter, Rachel (Teri Polo). His sister Nora (Frances McDormand) is a leftist nun who has brought along a guest, a South American dissident wanted by the INS. Terry (Pamela Reed) is splitting up with her husband Boyd (Tim Curry) after finally realizing that he's gay. And Johnny is thinking of quitting his job and leaving his wife Amy (Blair Brown), which makes the mysterious Cassie (Nancy Travis) seem all the more attractive. Passed Away marked the directorial debut of successful screenwriter Charlie Peters.

Shirley Tannenbaum
as Wife
View All

Critic Reviews for Passed Away

Passed Away is one of those movies that introduces a family filled with troubled people, brings them all together at a funeral and solves their dilemmas, while also trying desperately to be funny and heartwarming

Even such a superlative cast cannot save this picture, which seems desined to pass away soon, to be interred and half-forgotten in the video racks of America.

Audience Reviews for Passed Away

There are no featured audience reviews yet. Click the link below to see what others say about Passed Away!