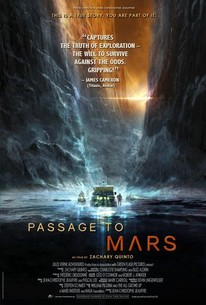 Before man makes it to Mars, he must conquer the Arctic. Passage to Mars is the incredible true story of six men who embark on a treacherous, 2,000-mile journey across the forbidding tundra of the Northwest Passage-an alien voyage on planet Earth designed to prepare NASA astronauts for an eventual mission to Mars. But as an expedition that was supposed to take weeks stretches into a two-year odyssey, the crew must overcome seemingly insurmountable challenges and life-threatening conditions if they hope to realize their dreams of someday reaching the Red Planet. This breathtaking adventure features narration by Zachary Quinto and special guest voice appearances by Buzz Aldrin and Academy Award (R) nominee Charlotte Rampling.

Critic Reviews for Passage to Mars

[A] misguided hybrid that makes tediously clear from the outset that [its] conceit just isn't working.

Danger doesn't quite translate into sustained drama here, in part because the reliance on voiceover distances us from the action.

Take "Ice Road Truckers," mix it with "The Martian" and blend in a book of verse, and you've got something that resembles "Passage to Mars," a beguiling documentary that's concerned as much with images as it is with information.

Unable to develop any of the team members as personalities or to evoke the supposed otherworldliness of its arctic setting, it becomes a testament to the fact that a sense of wonder doesn't mean jack without the talent or art needed to express it.

It's a thrill to see so careful a re-creation - and some actual footage - of Martian geography.

Jeauffre's blending of terrestrial and extraterrestrial imagery is hypnotizing and spectacular, but this story of survival feels too bloodless to appeal to the average viewer.

Bernard Boo
We Got This Covered

Essentially trite presentation of a facsimile space mission that never gets off the ground, in more ways than one.

Audience Reviews for Passage to Mars

There are no featured audience reviews yet. Click the link below to see what others say about Passage to Mars!