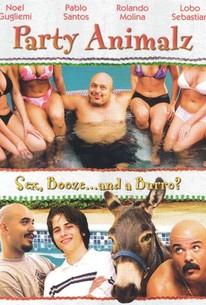 Nothing screams "PARTY!" like a vacant mansion in Beverly Hills, and when a pair of Latino teens finds just such a location, they spare no time in rocking the house in this comedy from director Ted Mendenhall. Though the teens' house-painting jobs provide just barely the money needed to get by, the job does have its perks -- and when they're hired to paint a wealthy couple's house, they find out just much fun it can be. After a few phone calls, the house is filled with some of the duo's wildest friends, and soon enough, the party careens so far out of hand that they're not quite sure they'll be able to reign it in before the owners return!

Chris Caldovino
as Off. Ray Cyst

There are no critic reviews yet for Party Animalz. Keep checking Rotten Tomatoes for updates!

There are no featured reviews for Party Animalz at this time.