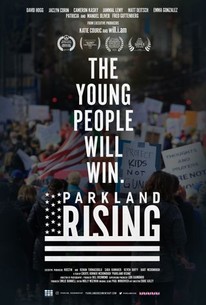 On February 14, 2018, a school shooting took the lives of 17 people and suddenly changed the conversation about guns in America. The shooting at Marjory Stoneman Douglas High School could not be called "the deadliest" or even "the most shocking" mass shooting in recent US history. It came less than five months after 58 people were shot and killed at an outdoor concert in Las Vegas, and nothing changed. It came less than two years after 49 people were shot and killed at the Pulse nightclub in Orlando, and nothing changed. There were 345 mass shootings in the US in 2017 alone, and nothing changed. But this time, something clicked.

An impassioned record of incremental change in an age of uncertainty.

"Parkland Rising" passes the low bar of not undermining the people it covers, but by avoiding both research and conflict, it fails to provide a reason for its own existence.

Through its images of peaceful protests and demonstrations from the era, Sirulnick's narrow but inspiring film finds deeper relevance in the face of the current protests surrounding George Floyd's murder.

Parkland Rising is undoubtedly sympathetic to the activists' agenda, but director [Cheryl] Horner McDonough does an admirable job of presenting the good, bad, and ugly sides of this activism.

With its heart on its sleeve, 'Parkland Rising' follows one youth-driven movement that refuses to accept the American madness of the intolerable being seemingly intractable.

This is a stirring hour and a half.

At a time when social tensions across the country could scarcely be more acute, it's a reminder that there's something beyond grief and destruction, something worth working for.

"Parkland Rising" might not change your mind on the topics at hand but hopefully it will leave you thinking about the teenagers' simple plea: Let us live.

An inspiring portrait of young activists for gun control reform.

Despite the sombre subject matter, the overall feeling is uplifting; this film is about positive action and moving forward; not dwelling on the past but not ignoring it either.

There are no featured reviews for Parkland Rising at this time.