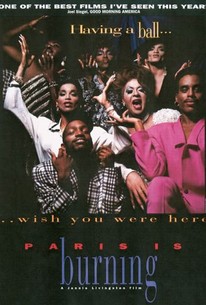 Critics Consensus: Paris Is Burning dives into '80s transgender subculture, with the understated camera allowing this world to flourish and the people to speak (and dance) for themselves.

Critics Consensus: Paris Is Burning dives into '80s transgender subculture, with the understated camera allowing this world to flourish and the people to speak (and dance) for themselves.

Critic Consensus: Paris Is Burning dives into '80s transgender subculture, with the understated camera allowing this world to flourish and the people to speak (and dance) for themselves.

Jennie Livingston's documentary offers a behind-the-scene glimpse at the golden age of New York "Drag Balls" where rival fashion houses come together to celebrate, vogue and compete for bragging rights. Shot between 1985 and 1989, the narrative inter-cuts between individual stories that chronicle the experiences of the African-American and Latino, gay and transgender subculture in a time when the city was consumed by the ideals of wealth and glamour.

News & Interviews for Paris Is Burning

View All Paris Is Burning News

Critic Reviews for Paris Is Burning

Half sad, half exuberant.

The earnestness of the competition is what holds this film together.

There is a lot of common sense and natural wit behind the role-playing. Yet there is also a terrible sadness in the testimony.

[The film intercuts] ball scenes with interviews with the participants in less hectic, more reflective moments. It is those personal, humanizing moments, much more than the hectic, eye-catching hubbub of performance, that truly linger in the mind.

If all you know about Voguing comes from Madonna, this spirited and heartbreaking documentary from first-time filmmaker Jennie Livingston will be an eyeopener.

The film is a comprehensive, if dated, tour through a subculture which, thanks to the ministrations of Madonna, has long since passed into the semi- mainstream.

A scintillating example of how art can serve life without compromising its objective of adding meaning to our journey.

Not since Andy Warhol's The Chelsea Girls have I been so taken and fascinated by such a gallery of real-life, stunningly etched characters.

If the wit, glamour and mind-boggling outfits of Paris Is Burning are disarming, not far beneath the film's surface is an immensely moving quality.

Although the film has its dark moments, Paris Is Burning is mostly upbeat, and the overall message of the movie is heartening and humane.

Livingston's film shows how fantasy can mitigate the sadness of life.

Paris Is Burning is a daring and remarkable little film.

Audience Reviews for Paris Is Burning

As a revealing (and sad) portrait of this subculture of the 1980s, the film documents the balls, the "houses," "voguing" and a "realness" competition that raises some fascinating questions about what real means (gay men even appear teaching women to behave like "real" women).

This documentary is a beautiful time capsule of the "ball" culture of late eighties drag culture. Not only does it show the performance aspect of these intricate and flawless drag shows, but also the AIDS fueled hysteria of the time, discrimination against gay people, and the fears and doubts of these one of a kind people. Since the film was released, many of the performers have died of AIDS related illnesses, and many of their trade secrets and views on life are only evident on the celluloid that this film was printed on. The subjects of this two year documentary are fascinating because of their candor and reverence for their craft. The film is both insightful in its depiction of ball culture and thoroughly entertaining for its depth and scope.

A timeless, classic LBGT film. Quite bold for its time...which I guess means it isn't exactly "timeless"....still....