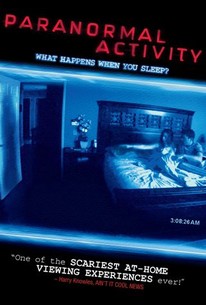 A haunted house makes no secret of the fact it's not pleased with its new tenants in this independent tale of supernatural horror. Katie (Katie Featherson) and Micah (Micah Sloat) are a twentysomething couple who've just moved into a new home in San Diego, CA. Katie has an interest in the paranormal and believes that malevolent spirits have been following her since childhood, though Micah is not so easily convinced. However, after several nights of loud noises and strange happenings, Micah starts to agree with Katie that some sort of ghost may have followed them to the new home. After a paranormal researcher tells the couple he can't help them, Micah decides to take control of the situation and sets up a battery of video cameras so that if a spirit manifests itself, he can capture its behavior on tape. Once the surveillance cameras are in place, Katie and Micah bring in a Ouija board in an effort to talk to the spirits, a move that deeply offends the ghosts. Paranormal Activity was the first feature film from writer and director Oren Peli. ~ Mark Deming, Rovi

Ashley Palmer
as Girl on Internet

The climax is deliciously scary, and Peli gets considerable mileage from the simple matter of lights inexplicably going on in another room.

It illustrates one of my favorite points, that silence and waiting can be more entertaining than frantic fast-cutting and berserk f/x. For extended periods here, nothing at all is happening, and believe me, you won't be bored.

When the object of the hype turns out to be as lame as this film, the whole exercise becomes just another Hollywood con job.

Demonstrates that when filmgoers decide they want to be scared, they will forgive absolutely anything -- bad acting, cheesy dialogue, poor camerawork, bad editing, unconvincing effects, incoherent storytelling -- for the sake of a good scare.

If Paranormal Activity is not quite as scary as the publicity would have us believe, it is at least witty, thought-provoking and -in a woozy, stark sort of way - beautiful.

It's this feeling of vulnerability that Peli's slow-burning supernatural chiller so effectively exploits, fashioning heart-stopping scares out of almost nothing.

It's one thing to create a movie that functions as good narrative storytelling, but it's another to create that movie knowing exactly how an audience is going to react to stimuli.

Intense, disturbing and with an ending that will leave even the most resolute disbeliever sleeping with the light on, it's as much an experience as it is a piece of entertainment.

The movie gets enormous mileage out of small, barely noticeable details-a door opening by itself, covers stirred by a breeze from nowhere, a chandelier swinging.

Its scares are undeniably effective, but the overall product lacks a real hook to pull in the audience.

[Paranormal Activity] is way more scary than Blair Witch because it takes the old conceit of things that go bump into the night, and brings it slyly into a well-to-do, middle class suburb.

Paranormal Activity has some big flaws, but I find big flaws fairly forgivable in $10,000 films made by amateurs.

The idea may be interesting even if totally unoriginal, while the story is developed well in a careful pace. Still, the movie feels like a mere silly trick to scare the audience and nothing else, even if it isn't scary or intriguing.

Not a monumental piece of work, but it still delivers thrills and never bores. It's basically pop-out after pop-out. It's incredibly cool watching it with the sound loud and the lights off.

Paranormal Activity is a prime example of how creativity can prevail through budget limitations; this movie is original and downright creepy.

Better than I expected but really I think im over this style of film.