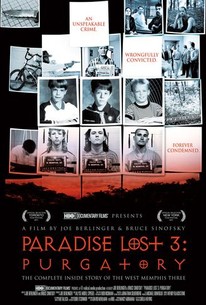 The third part of the Paradise Lost trilogy, examining the case of the notorious West Memphis 3. This final version chronicles the last years in prison and eventual release of the three men accused of brutally murdering three boys in West Memphis, Arkansas in 1993. The men were released after entering an Alford plea on August 19, 2011, allowing them to assert their innocence while acknowledging that prosecutors had enough evidence to convict.

The new film, despite the astounding story it tells, is the most conventional, least urgent and, cinematically, the least interesting of the three.

In the shadow of such sickness, all the personal dramas can't help but pale, but there are still surprising and powerful moments.

Paradise Lost 3 is perhaps the most interesting and well-made film of the trilogy.

The new film is more informational than resonant. But you can still sense a vacuum, a rat pit of stories waiting to be unearthed. The dark something that triggered the whole ordeal in West Memphis is still out there.

First and foremost a testament to the power of the documentary.

Destined to rank as one of the major achievements in American documentary, the Paradise Lost project comes to a presumed end with Paradise Lost 3: Purgatory.

Byers' transformation into one of the trio's most passionate defenders is an intriguing metaphor for the entire series, not only remarkable in how the pendulum has swung, but also troubling since it redirects anger in a way it still could be misplaced.

Metallica aside - Berlinger also directed Some Kind of Monster - Purgatory is beautifully framed, critical but not judgmental of the law enforcement official... and even-handed with the jailed men who are somehow not bitter or beaten by their ordeal.

Seldom has a film inspired so much dislike in viewers towards the very system designed to protect them.

Purgatory is most affecting in its most intimate performances.

Beyond being an articulate examination of the case, the conclusion of the film will leave you with all kinds of questions to ponder about what justice in our legal system really means.

This third film, an inarguably powerful knockout punch, reminds us of the documentary film's power to change people's lives.

Even though the first half seems more like a recap of the previous two movies, this is a well-structured and objective documentary that shows us what "beyond any reasonable doubt" should mean in a place where people can't let go of their own preconceived opinions.

Third Paradise Lost film brings new development to the WM3 case. This is a brilliant conclusion. In this third film, new evidence has surfaced that proves the innocence of the WM3. This is a brilliant and powerful documentary. This film further proves the innocence of the three men wrongly convicted of the murders. In 1993 filmmakers Joe Berlinger and Bruce Sinofsky direct a terrific third part that gives us more information about the infamous WM3 murder case. After nearly 18 years, there's some new development in the case. This film presents a closing chapter in the controversial case and presents the courts with new evidence that the WM3 are innocent of the crimes. Brilliant, shocking and disturbing, this third film is a must see for those who enjoy a good documentary. This is a fine film that concludes the nearly twenty year old ordeal of the WM3. This is a well put together documentary with terrific insight into the case and it introduces new proof to their innocence. These three films are superb in showing the holes in the Judiciary system. What really stood out in this film is how far people wrongly convicted of a crime they did not commit. This is a great documentary that is sure to please people who have seen the first two films. Paradise Lost 3 is a powerful documentary, and one that shows that some people directly involved in the tragedy have come around and questioned the guilt of the three men. This is a remarkable film that is brilliant, poignant and ultimately redeeming.

Good for what it is, and bad for same. But I can't understand how they released it in 2009 with those interviews from 2010 & 2011!!! Hope the rectifications will be made sooner than later, although it's nothing of great concern (and so I'm not taking efforts to report it).

A great documentary about a larger than life situation involving a backwards justice system that even a novelist couldn't have written better. Getting to hear the West Memphis 3 talk, getting to hear those involved with the prosecution talk compared to their statements during the trials, and seeing the disturbing images attached to this case, really make for a powerful documentary.