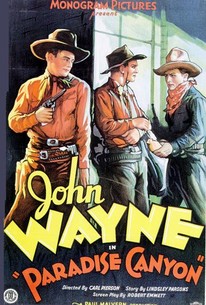 Paradise Canyon is one of the most action-packed entries in John Wayne's "Lone Star" series. On the trail of a counterfeiting gang, undercover agent John Wyatt (Wayne) joins the traveling medicine show of Doc Carter (Earl Hodgins). For a while, it looks as though Doc is the leader of the gang, but when he and his daughter, Linda (Marion Burns), are kidnapped by the real villain, Wyatt realizes he's been riding the wrong trail. The last-minute rescue is almost as thrilling as the earlier scene in which Wyatt takes a high dive off a steep cliff into a river. Ace stuntmen Reed Howes and Yakima Canutt are prominent among the supporting players.

There are no featured audience reviews yet. Click the link below to see what others say about Paradise Canyon!