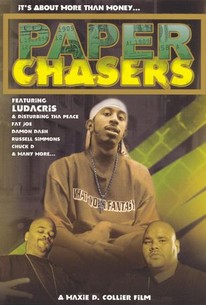 Hip-hop music and culture has created a new breed of entertainment entrepreneur, and new opportunities for someone with the right sounds and the right ideas to go from selling records out of their car trunk to running a multimillion-dollar recording empire. Paperchasers is a documentary that looks at the many faces of the business behind R&B and hip-hop, ranging from artists with nearly a half-century in the music business (the legendary James Brown) and pioneering rappers (Chuck D. of Public Enemy) to up-and-coming MCs (Rah Digga) and would-be moguls still selling mix tapes at swap meets. Paperchasers also features contributions from Jamie Foxx, Bill Duke, and Jermaine Dupri.

Fans of the artistry of hip-hop music will find a whole lot to enjoy here, as Collier clearly has a lot of respect for his subject material.

There are no featured reviews for Paper Chasers at this time.