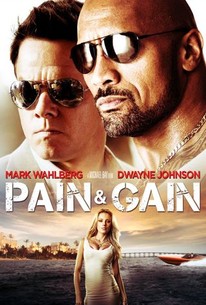 Critics Consensus: It may be his most thought-provoking film to date, but Michael Bay's Pain & Gain ultimately loses its satirical edge in a stylized flurry of violent spectacle.

Critics Consensus: It may be his most thought-provoking film to date, but Michael Bay's Pain & Gain ultimately loses its satirical edge in a stylized flurry of violent spectacle.

Critic Consensus: It may be his most thought-provoking film to date, but Michael Bay's Pain & Gain ultimately loses its satirical edge in a stylized flurry of violent spectacle.

From acclaimed director Michael Bay comes "Pain and Gain," a new action comedy starring Mark Wahlberg, Dwayne Johnson and Anthony Mackie. Based on the unbelievable true story of a group of personal trainers in 1990s Miami who, in pursuit of the American Dream, get caught up in a criminal enterprise that goes horribly wrong. (c) Official Site

Pain & Gain weighs about 700 pounds when it ought to weigh 2.

Michael Bay's muscle-bound satire is Bad Boys on 'roids. And that's not a good thing.

Forgive me while I weep in despair. Pain and Gain is awful beyond imagining.

There's something inspired about putting Michael Bay in charge of a brazen action-comedy about gym-pumped knuckleheads who screw up their own criminal masterplan most royally.

Along with comedy dismemberings, farcical GBH and the barbecuing of human hands, the movie offers the equally gruesome spectacle of a metaphor being clubbed to death.

The first hour may be Bay's career high point: it's fast, freaky, gloriously tasteless and startlingly pointed in its attacks on western insecurity, shallowness and greed.

Incredibly silly and over-exaggerated, Pain and Gain offers very little in substance. But if shameless entertainment is more your thing, indulge away.

Bay may be working with humans, but he's still treating them like robots.

Bay's trademarks are there - the loud music, the slow-motion spin, the outlandish action moments. But this is also a movie with plenty of dark humor and a cast not afraid to be the butt of the joke.

Bay's cold militarist aesthetic is perversely appropriate in Pain & Gain; the men treat themselves as hardware they can simply build up, so the film treats them as such.

...registers with all the smoothness of a lumpy protein shake going down a sore throat. Yes, there is plenty of Pain and questionable Gain for Bay's revved up farce of calisthenics cretins.

"Pain and Gain" isn't just another in a long line of Michael Bay films that "cinephiles" can point to as proof positive that cinema is dying. It's a cutting, dark satire about the search for the American dream and how such a preposterous ideal can be dangerous (even deadly) in the psyche of the more sense-deficient. It has a brain, and Bay's bloated style and vivid cinematography add too the tone of this ridiculous true crime saga. Wahlberg and Mackie aptly portray two of a rag-tag band of idiots, but they exude a sensitivity and self consciousness that has us rotting for them against our better judgement... but it is Dwayne "The Rock" Johnson who steals the show, with incredible range and presence. He's been really solid in other movies before (playing type), but this is career best work from him that HONESTLY deserve some Oscar consideration. He's that good. Like many Bay films, "Pain" is a bit too long and struggles with some tonal shifting, but this is really energetic stuff that can't be denied, and most surprisingly it has a soul and a sense of place. That's more than many films can attest too. From it's great opening sequence, "Pain and Gain" grabbed me and I was left highly entertained throughout. It's "stupid people doing REALLY stupid things" plot reminded me of the Coen's "Burn After Reading." You know what? Bay's film is better. It's his best since "The Rock," and yes... one of my favorites of 2013.

By far, I am not saying that Michael Bay finally pulled his head out of his ass and made a film that doesn't rely on juvenile humor and violence, but compared to his prior ones, this may be his "Citizen Kane." The story is based on several articles written in the nineties about a gang of bodybuilders who robbed several wealthy people so they could find their version of the American Dream. Definitely not to credit Bay, but there are some solid scenes, character development, and moments of unintentional hilarity that pepper this film. It's partly due to the, again, juvenile and yet somehow appropriate humor, which veers into black comedy every chance it gets. You could describe the film as being gory, but that would make you think it's incessantly violent and there's a lot of torture. Not to say there isn't, but that's not why it's fun to watch. Its fun relies on how seriously it all relies on the characters who, though they aren't anything new, often make bald, blatant statements about their socio-economic strata in society, as well as their own despondency for their situations. Also, they're unapologetically greedy. Not to a villainous extent, but enough that they are seriously blinded to the repercussions of their actions. The cast is also brilliantly casted. Mark Wahlberg may not be doing anything new with his performance, but as usual he entertains as the lug headed sociopath. Dwayne "The Rock" Johnson is sensational as the hopefully religious and yet deviant drug addict, because he is friendly as well as depraved, his motivation always entertaining. Anthony Mackie and Tony Shalhoub slug along, but don't have the fervor of the other two. What doesn't work seems to be a shift of tone that occurs several times throughout the film. It's distracting, especially as Bay tries to play catch up, eventually changing the ending to something resembling a morality tale. Otherwise, what didn't work didn't always bother me, because I wanted to know just what horrific things these people, in reality, actually did, and that's what makes the ending at least forgivable.

The chemistry among the lead roles were great and at times laughable, but Pain & Gain lacks the ability to maintain a provoking storyline with the amount of loosely mixed up narratives, psychedelic blend and more-than-necessary violent nature. 3/5

OK lets get one thing straight here, let me clear up a big misconception for you all, weight lifting does not equal fitness. You wanna get properly fit, actually healthy and fit, then you run, you swim, you cycle or you play sports, athletics being the best naturally. Lifting weights may make you look good but it does not make you fit and healthy. You merely pack on weight, down lots of protein shake shit (which is terrible for your skin) and give yourself a possible heart condition because when you start to slow up as you age (and you will slow up, you won't be able to keep it up) all that muscle turns to fat, and all of a sudden, guess what you're fat. If you're a rich movie star like Dwayne Johnson then you might get away with it for longer for obvious reasons, but for you and me you're just giving your body a whole lot of problems later on in life. So take my advice, from someone who has been a distance runner since the age of 18, you might look good now, but you're not uber fit n healthy and you certainly won't be as you age. I haven't even gone into the drug use temptation either geez!, take note of the over steroid use sequence kids. So the first lines spoken by Wahlberg's character 'my name is Daniel Lugo, and I believe in fitness' made me laugh out loud. The plot here is truly bewildering, based on a real deal situation where a group of criminals (including weight lifters) got together and decided to kidnap and extort several victims for their assets, this even lead to murder apparently!. Annnnnd Hollywood has made a comedy out of it, hmmm, what's next a comedy about a high school shooting!?. OK now I'm not gonna whine on about this, not that much, because this film is actually quite a fun film. The premise is fun in a black comedy kind of way, a kind of mob/gang/heist flick that made me think of 'Get Shorty' for some reason, just not as light hearted. When I say it reminds me I mean the fact both are set in Miami and involve lots of money heists and violence, pretty swish comparison there eh. I won't deny that once again The Rock Johnson brings home a good performance showing that he is actually better in comedy than action (I think). Wahlberg is also pretty amusing as the fitness obsessed leader of this body building street gang (gang consisting of three). Most of the time the trio are bickering and squabbling over what to do next and how to complete their mission, its actually funny. Wahlberg is good at pushing the others to do bad things whilst always scheming, whilst Mackie isn't as good as the other two big names but his romance with a heavy set white girl is funny. Altogether they are a surprisingly good comedy trio, bordering on slapstick at times. Shalhoub completes the laughs as the rich Jew these guys are gonna do over. At first you don't really care much for the guy and are kinda rooting for the trio. But in time as the guys wear him down and make him sign over his assets you feel sorry for him. Again he kinda reminded me of the character Dennis Farina played in 'Get Shorty'. Must point out there is plenty of ass on show here, this is no soft comedy, the girls on display here are so tight n firm oh my!! Bar Paly who plays the main stripper girlfriend for Johnson is so hot I can't even begin to describe in words, just google her. We lose the 'Get Shorty' type vibe as we near the crux of the plot and towards the finale. Things get messy, bloody and grizzly yet it still retains the comedy, is that right?. I was hooked on the plot though no doubt about that, I was genuinely interested to find out what happens, but as things got more and more gory I also found myself not enjoying it as much. I guess the fact the film is based on a real event kinda makes you think whilst watching, should I be enjoying this? sniggering at this morbid spectacle? this actually happened and affected real people, hmmmm. So the apart from the fact I actually found this kinda fun, the other surprise was the fact its directed by none other than Bay, yes that Bay. This could be his best film to date if you don't count 'The Rock'. It starts off quite amusing, slick, stylish and satirical, visually glossy naturally and highly enjoyable. Unfortunately it does spiral into a clumsy, bloody, violent chase flick that does remind you...oh yeah, this is a Bay movie (although blood is not a usual ingredient). Clearly certain sequences have been blown out of proportion for thrills, loads of artistic license has been used and the fact the plot makes you like the main trio (who are actually killers and the bad guys) is somewhat dubious really. But all that aside this is still one of Bay's best films for sure, just a shame he can't seem to make a film without some kind of backlash. Usually because his films are terrible and dump on original source material, this time its a morality issue. Oh Mr Bay.