Oz the Great and Powerful2013 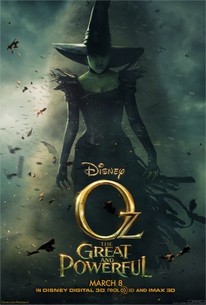 Critics Consensus: It suffers from some tonal inconsistency and a deflated sense of wonder, but Oz the Great and Powerful still packs enough visual dazzle and clever wit to be entertaining in its own right.

Critics Consensus: It suffers from some tonal inconsistency and a deflated sense of wonder, but Oz the Great and Powerful still packs enough visual dazzle and clever wit to be entertaining in its own right.

Critic Consensus: It suffers from some tonal inconsistency and a deflated sense of wonder, but Oz the Great and Powerful still packs enough visual dazzle and clever wit to be entertaining in its own right.

Oz the Great and Powerful Photos

Disney's fantastical adventure "Oz The Great and Powerful," directed by Sam Raimi, imagines the origins of L. Frank Baum's beloved wizard character. When Oscar Diggs (James Franco), a small-time circus magician with dubious ethics, is hurled away from dusty Kansas to the vibrant Land of Oz, he thinks he's hit the jackpot-fame and fortune are his for the taking-that is until he meets three witches, Theodora (Mila Kunis), Evanora (Rachel Weisz) and Glinda (Michelle Williams), who are not convinced he is the great wizard everyone's been expecting. Reluctantly drawn into the epic problems facing the Land of Oz and its inhabitants, Oscar must find out who is good and who is evil before it is too late. Putting his magical arts to use through illusion, ingenuity-and even a bit of wizardry-Oscar transforms himself not only into the great wizard but into a better man as well. When small-time magician Oscar Diggs (James Franco) pulls one flimflam too many, he finds himself hurled into the fantastical Land of Oz where he must somehow transform himself into the great wizard-and just maybe into a better man as well. -- (C) Walt Disney

Mila Kunis
as Theodora/Wicked Witch of the West

Abigail Spencer
as May

Ted Raimi
as Skeptic in Audience

News & Interviews for Oz the Great and Powerful

View All Oz the Great and Powerful News

Critic Reviews for Oz the Great and Powerful

The twister that comes to whirl Oscar into Oz is so preordained you could find its departure information and flight time from an airport travel board.

This eye-filling fantasy is an entertaining riff on how the Wizard of that immortal film found his way to Oz.

An imaginative mix of live-action and CGI that pays homage to the iconic images and timeless sense of wonder in the classic The Wizard of Oz without being too deferential.

Oz the Great and Powerful is entirely serviceable family entertainment. Problem is, serviceable doesn't quite cut it when you're talking about the magical land of Oz.

Aside from a trio of witches that can hold its own with Eastwick's in the dishiness department, Oz the Great and Powerful is a peculiarly joyless occasion.

Let us take a moment to praise two great and surprisingly powerful characters: a winged monkey and a wee girl made out of china. Because so much human wonder resides in these two creations of make-up, puppetry, digital effects and lovely performances.

One wonders what L. Frank Baum would think of movies like Oz the Great and Powerful. He'd appreciate the technical innovations of modern cinema, most likely. But I doubt that he'd appreciate how his characters have been "updated."

Yep. It's true. There's no place like Oz. We're off to see the wizard, the wonderful wizard of Oz...Oz The Great And Powerful.

This incarnation of Oz and its stars may be pretty to look at, but nearly every aspect of the production is empty-headed.

Weighing in at 130 minutes, Oz the Great and Powerful is as cumbersome and overwrought as its title.

The studio that hinges on creating magical family entertainment seems to have forgotten that magic, contrary to popular belief, is not created by adhering to formula.

There's not enough to make a new classic to match the old. This movie may be mildly diverting, but for that you'll have to keep looking somewhere over the rainbow. It ain't here.

Audience Reviews for Oz the Great and Powerful

I presume this film must be made up of various bits n bobs from Baum's sequel books as I don't believe there was a prequel story/book written. All his stories were set after the original [i]Wizard of Oz[/i] so I'm guessing this must be a lot of artistic license? Back to Oz we go, for the third time, question is, is this adventure as good as the previous two? The first is a silver screen classic, the second was a dark but highly imaginative twist with superb characters. This time we re-enter Oz guided by horror maestro Sam Raimi...and boy can you see it. First impressions were simply, they're copying the original, starting off in black n white then bursting into colour once we reach Oz, cute, but its been done. The main thing you notice is obviously the visuals, upon touchdown in Oz we are greeted with (as expected) huge splashes of colour and shiny things, a glistening Emerald City, colourful animals, clear blue skies and perfect fairytale costumes. I must admit they have recreated the look of the classic original nicely. The yellow brick road looks great, the familiar scenery of fields and wooden fences hark back nicely to when we saw Dorothy walk past them and we have all the chirpy quirkiness of the Munchkins. I won't deny there are some lovely landscape's on display, rainbow skylines and the weird and wonderful flowers n fauna of Oz dazzling your optical senses. It just a damn shame the CGI is so utterly average throughout with awful bluescreen/artificially superimposed actors against it. What's so stupid is the fact Oz lands in the land of Oz and within five minutes he's been brought to the Emerald City, hailed as the new King and sent off on this mission. Everyone thinks he's this wizard sent to save Oz and without a doubt the King. So The wizard (played poorly by Franco) goes off on his mission to destroy the evil witch and picks up a few odd friends along the way to help him. An annoying, flying, bad CGI monkey and a sweet yet gradually annoying little girl doll made of china...nice idea, nicely envisioned, but her lippy personality isn't funny. Kinda sounds familiar no? regular dude dumped in a strange fantasy world, now he's gotta save that world. Army of Dar...naah couldn't be. The other thing that got me was the fact Kunis' character falls for Oz the minute she sees him. Then when he goes off to find the evil witch she gets all upset, so much so that when she finds out he's flirting with the other witch he's suppose to destroy, she turns to evil! So she's a bit delicate then! falls in love, gets heart broken and turns to the dark side all within a few hours of meeting some guy! To be honest I really don't think Raimi was the right choice to direct this film. It swings from being quite sweet in places as it should be, to some outright soft horror moments! Raimi clearly not being able to resist his [i]Evil Dead[/i] days. The flying baboons are pretty darn scary for kids if you ask me, since when did the evil witches flying hordes get some monstrous?!! Then there's Weisz's ending...whoa! oh and graveyards? really? The acting is also dreadful, yes I realise its a sweet fable but come on, Franco is terrible and totally miscast (still at least its a change from seeing Depp who I'm sure was gonna pop up at any moment). The guy has no charm no wonder and he's not funny, he plays it too snively for this character, he's unlikeable. Kunis is made up waaay too much for the green skinned evil witch, she's sexy for Pete's sake! the evil witch ain't suppose to give the adult male audience a bonner. Plus I gotta say she seems really really violence obsessed here, wanting to tear her enemies apart and make the yellow brick road run red with the blood of the goodies...Jesus! kids film here. The only people who actually look the part and put in a good show are all the extras playing Munchkins Quadlings, Tinkers and Winkie Guards, miles better than the main cast, I guess. I think the problem here is the film can't quite decide what direction to go in. Its not entirely an innocent sweet musical like the original and its not as character driven or imaginative as 'Return to Oz'. Being a typical modern film they just can't help themselves with over the top effects, silly action, the odd explosion, lots of talk of death and killing and way too much hokey sterile CGI. The film even turns into 'Star Wars' at the end with a dark side force lighting battle. On top of this the film seems to border on being almost a parody of the material source, too much of a comedy, too much mockery of the material eg. when the Munchkins try break out in song Oz shouts at them to stop as if to say...lets not go down the soppy wet musical route. Its not as bad as the Burton 'Alice in Wonderland' fiasco but it sure as hell comes close CGI wise. On the whole Oz does look nice when using real sets and real objects but that's it. Like other sequels/prequels of old franchises they manage to recreate the look of the old films brilliantly, but the rest of the content is just very average and merely shows how good the older films are. There are now talks of a sequel! how can there be a sequel?!

An exciting roller coaster of a prequel with endless welcome references to the original movie and tons of more adventure and exuberant visuals that look quite nice in 3D - and it also aims for a broader public, being just as pleasant to adults as it is to children and munchkins alike.

So much effort was spent on making the surroundings look lovely, so why did the costuming and the special effects look so cheap? Especially Theodora and Glinda's outfits were horrible. The acting left a lot to be desired as well, Rachel Weisz and Bill Cobbs probably being the only ones who didn't make me cringe.

Oz the Great and Powerful Quotes