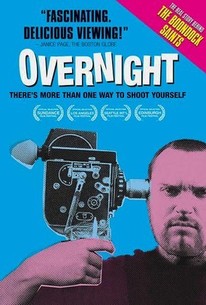 Critics Consensus: This absorbing but wince-inducing documentary is a cautionary tale about the costs of hubris in the world of indie film.

Critics Consensus: This absorbing but wince-inducing documentary is a cautionary tale about the costs of hubris in the world of indie film.

Critic Consensus: This absorbing but wince-inducing documentary is a cautionary tale about the costs of hubris in the world of indie film.

The megalomaniacal rise and fall of filmmaker Troy Duffy is chronicled by one-time friends and colleagues in director Mark Smith's documentary. The film takes its title from the "overnight success" that befell Duffy in 1996, when the then-bartender was signed by Miramax president Harvey Weinstein to direct his killers-on-a-mission-from-God script The Boondock Saints. Smith's cameras follow Duffy from pre-production -- when he battled with executives over casting and financing decisions -- on through to the lackluster release of the film. What's more, Duffy expected his relative cinematic success to translate over to his burgeoning rock band as well -- and the tension created by the presupposed deal caused him to alienate just about everyone involved with both projects.

Tony Montana and Mark Brian Smith's acidic, vitriolic takedown of Duffy boasts the abrasive intensity of a migraine headache and the depth and scope of a bona fide American tragedy.

A portrait of Hollywood hubris extraordinaire.

[An] unflinching depiction of a would-be Tarantino turning himself into chopped liver.

A compulsive, cautionary tale about a man whose self-trumpeted 'deep cesspool of creativity' seems destined to remain undredged.

The story of the neither late nor great Troy Duffy would make the perfect film-school graduation gift.

In their rush to give Duffy his comeuppance, the filmmakers barrel past their movie's real potential, which could have been a blistering exposé of Hollywood's bandwagon mentality.

There's an element of revenge in it, with the filmmakers editing their footage in a way that highlights Duffy's bad behavior -- but, for the most part, their subject sinks himself.

Duffy's story is a potentially notable one, but this documentary's amateur production values and the man's grating personality make it not-so-enjoyable watching.

For Duffy, watching this film must be like seeing a scab peeled off

The "next Quentin Tarantino" crashes and burns

The two directors take so much abuse from Duffy throughout the film that you can't help but feel that Overnight is their long-overdue revenge.

A disturbing, sad and blisteringly funny cautionary tale, I reckon this is the documentary of the year.

The documentary is better than boondocks saints. Its a story of friends, trust, and money. Fantastic!

"There's More Than One Way To Shoot Yourself" A documentary on the rise and stumble of Troy Duffy, the bartender-cum-filmmaker who was swept up by Miramax's Harvey Weinstein to turn his script for The Boondock Saints into a feature film.

REVIEW
Overnight follows Hollywood urban legend Troy Duffy, a guy who went from bartender to the "next big thing" in the late 90s literally overnight with a prospective deal with Miramax for his cult script The Boondock Saints. Duffy was a member of a creative group who called themselves The Syndicate and two of the members were lucky (and smart) enough to document this period. They thought they were making a documentary about a unheard of rise to fame but instead chronicled the deranged dealings of an egomaniac unleashed. Some of the scenes in this movie are so cringe inducing (like nearly every frame Duffy is in). How a guy who has absolutely nothing to show for it can ramble on and on about how he is the impetus for all things positive happening and not to blame for anything negative is beyond me. How anyone listened to him after a series of self induced setbacks is even stranger. As the film progresses, the viewer is basically treated to a visual display of career suicide. Filmmakers Tony Montana and Mark Brian Smith are interviewed on the disc and asked why no one ever took Duffy aside and told him he was ruining his big break. They answer that about midway through their experience that they decided the only thing salvageable from this destructive situation would be this documentary. They were right and this is an amazingly candid peak into the world of show business.

Overnight is a cautionary tale about the harsh reality of the film. It's also given extra theatrical strength due to the main character being one of almost complete fantasy. Duffy is the key element to his own demise. He's too sure of himself and has an attitude that only a mother could love. Trying to launch a film AND music career, one has to admire Duffy's drive, but not the fact he is almost unlikable. An underdog story that has you on the side of the huge money grabbing corporations just has to be watched. It's a great companion to The Boondok Saints. Saints was a great film, and ten years later, Duffy now has his sequel. Let's hope for a sequel to Overnight as well.