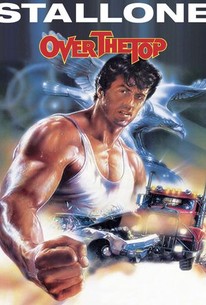 Critics Consensus: The definitive film about arm-wrestling truck drivers fighting for custody of their children, Over the Top lives down to its title in the cheesiest of ways.

Critics Consensus: The definitive film about arm-wrestling truck drivers fighting for custody of their children, Over the Top lives down to its title in the cheesiest of ways.

Critic Consensus: The definitive film about arm-wrestling truck drivers fighting for custody of their children, Over the Top lives down to its title in the cheesiest of ways.

Over the Top Videos

Over the Top Photos

A caring truck driver, wants only to gain custody of his beloved son after his ex-wife becomes deathly ill. Unfortunately his wife's powerful and wealthy father refuses to let that happen. Also, the son is angry and disrespectful because he so seldom sees his dad. In order to prove himself to his boy, the trucker enters an arm-wrestling contest.

Flo Gerrish
as Martha, the Waitress

Marion Mickens II
as Officer of the Day

Magic Schwartz
as Smasher
View All

Critic Reviews for Over the Top

It's a technique that gives new meaning to the term ''feeling had.''

The only diversion is keeping track of the shameless advertising plugs that dot the film, like toadstools after a rain.

The way to a kid's heart is through his daddy's biceps, though this big daddy looks more like terminal Dada.

Routinely made in every respect.

Inevitably there is a bicep-bursting climax in Vegas, and even though he does wear clip-on ties, it is impossible not to root for the New Yorkie Bar man.

The film seems to advocate reason as a good first approach to any problem, and all-out destruction as the next best thing.

The grapple scenes are so devoid of thrills that you long to return to the mushy melodramatics.

The film is on the long side for its story, as it's basically an unassuming little tug-of-love tale. But you'll be cheering for Sly on both custody and arm-wrestling fronts at the artfully-staged finale.

Granted that it's his ticket to riches, but you'd think that by now even Sylvester Stallone might be bored playing underdogs who beat the odds and become winners.

It's not traditionally considered a Stallone masterpiece, but I sure as hell love it.

It's cliché-ridden, wildly incompetent, and laughably serious about itself. But if you saw it at the right age, and if you approach it in the right frame of mind, it's a pretty easy way to kill a couple of hours on TBS.

Audience Reviews for Over the Top

Over the Top is one of those low budget action flicks of the 80's that relies on recycled ideas from previous films. In this case, this is basically Rocky with Arm Wrestling. Menahem Golan directs this picture, and the result is a somewhat decent action flick that has plenty of flaws, but is worth seeing at least once. The film's title is appropriate for this film, as it is a very silly idea for a film. I had heard plenty of things from this film, but I was slightly disappointed with this film, and the end result is a picture that leaves a lot to be desired. Although entertaining, this is a film that is quite forgettable and is not one that is Sylvester Stallone's best. Luckily for Sly he has made some stellar films before this one, and he would recapture his magic with Rambo III. The film is amusing for what it is, and it plays out like a guilty pleasure. Is the film decent, yes it is, but is not a film that is worth re watching again and again. The film's biggest problem is the formulaic plot and predictable ending. Another factor is the acting, it is quite subpar for Stallone, and he is underwhelming here as well. The actor playing his kid is quite annoying and just ruined the overall enjoyment. Over the Top could have been a great film, and it did have some ideas that worked, but most of the time, the film fell a little flat and it simply just left a lot to be desired in terms of a quality film. I liked it, but it was decent and nothing ever great. The lazy script and lack of original ideas was what made this one not standout among Sly's other films.

Sly wins the hearts of everyone again as the underdog arm-wrestling champion Lincoln Hawk. It's more a father and son movie than anything else, but no one should downgrade it for being family friendly. It's so good at what it is and Sly gets to cause enough destruction even within the PG guidelines. It's very 80s and sort've in the same reign as Tango and Cash, which I'm a huge fan of also.

Great movie. Stallone is a excellent actor never mind what the stupid critics say. Stallone proves he's champion wheather he's saving pow's from Vietnam, competing for the heavyweight championship of the world for boxing, and in this case arm wrestling. Stallone...you rock!!! I love this movie!

Over the Top Quotes