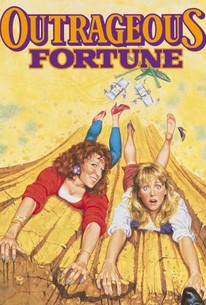 Two women with serious differences are forced to look out for each other in this anarchic comedy. Sandy (Bette Midler) and Lauren (Shelley Long) are a pair of struggling actresses who don't get along especially well -- and are even less fond of each other when they discover that they're both dating the same man, Michael (Peter Coyote). However, when Michael suddenly goes missing, they discover that he's actually an espionage agent working with a foreign government, and as they set out to find him, they learn that he has implicated them in his schemes. Now Sandy and Lauren are stuck with each other as they look for Michael while trying to outrun the law. Outrageous Fortune also stars George Carlin as Frank, a burned-out '60s holdover who the women meet along the way.

Joan McMurtrey
as Fencer No. 2

Mike Henry (I)
as Russian

Debra A. Deliso
as Ballet Double for Lauren

Midler and Long are never less than fun to watch.

As a vehicle for their considerable comic talents, the enterprise is wheelclamped by typecasting.

There's more regressive coyness in this buddy adventure-comedy than anyone should have to sit through in a lifetime...

Such rarefied screen writing calls for the peerless talents of Arthur Hiller, a director with the comic timing of a tax auditor.

Unfortunately, the movie is so busy cross-polinating its genres that it never pauses for the kind of thought that might have made it really special, instead of just fitfully funny.

Every bit as rude and wonderful as Ruthless People...

...could (and should) have been so much better.

The plot here has been played out hundreds of times (and often better) in other films.

A fairly good comedy has a few laughs.

Hadn't seen this since I was a kid, barely remembered it. Pretty funny, if unlikely movie. In the 80s, you really to suspend your disbelief in order to watch something like this. lol

Bette and Shelley fall for the same guy, who has been dating them both. Good cast.