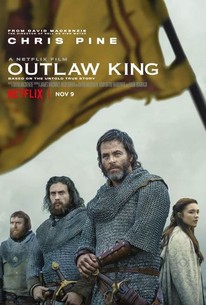 Critics Consensus: Muddy and bloody to a fault, Outlaw King doesn't skimp on the medieval battle scenes, but tends to lose track of the fact-based legend at the heart of its story.

Critics Consensus: Muddy and bloody to a fault, Outlaw King doesn't skimp on the medieval battle scenes, but tends to lose track of the fact-based legend at the heart of its story.

Critic Consensus: Muddy and bloody to a fault, Outlaw King doesn't skimp on the medieval battle scenes, but tends to lose track of the fact-based legend at the heart of its story.

OUTLAW KING tells the untold, true story of Robert the Bruce who transforms from defeated nobleman to outlaw hero during the oppressive occupation of medieval Scotland by Edward I of England. Despite grave consequences, Robert seizes the Scottish crown and rallies an impassioned group of men to fight back against the mighty army of the tyrannical King and his volatile son, the Prince of Wales. Filmed in Scotland, OUTLAW KING reunites director David Mackenzie (Hell or High Water) with star Chris Pine alongside Aaron Taylor-Johnson, Florence Pugh and Billy Howle.

Chris Pine
as Robert the Bruce

Stephen Dillane
as Edward I

You’re a Fresh One, Mr. Grinch… For Now

Outlaw King might be summarized as one big lapse in good sense for David Mackenzie.

For a historical epic that probably looks even better on the big screen, it's oddly well-suited to Netflix: spectacle, yes, but nothing too specific about it.

I suppose what I'm asking is, "What's not to like?"

"Outlaw King" is an old-school history lesson, but Mackenzie presents it with a modern flare, and its themes of a small group overthrowing the ruling power are especially timely today.

With the exception of a few slow spots, Outlaw King flows briskly. It's one of the better "Netflix originals" the service has provided and worth the expense of two hours.

While we likely have not seen the end of Robert the Bruce on film, this for sure is a worthy addition to the canon.

There is no doubt OUTLAW KING is an engaging and well made epic. However - for better or worse - it is not redolent with the romanticism that allows historical epics to break out from their niche.

At one point, when Pine was riding around on a horse while wearing what looked like a gold blanket, I had absolutely no way of distinguishing Outlaw King from Monty Python And The Holy Grail.

In addition to the impeccable single-shot introduction and Barry Ackroyd's stunning cinematography, it is the graphic violence that really captures the audience's attention, as it conveys the horror and ruthlessness of Scotland's enemies.

It's a frustrating watch as there's probably a good movie in there somewhere. Perhaps Mackenzie should go back to the drawing board and cut another twenty minutes.

By not focusing on mythology, Mackenzie keeps Outlaw King from becoming nothing but a war cry of a film. The story's able to bring to life Robert the Bruce's personality.

By and large, when there's no battle taking place, Outlaw King is not a rousing success, but those fight scenes are spectacular, and recurring.

Netflix produced films have been a mixed bag. Notably, most of their content seems to be either exceptionally great or outright trash. This particular picture, Outlaw King, lies between the two extremes. Outlaw tells the story of King Robert the Bruce and the later stages of the medieval Scottish War of Independence. The inevitable comparison to Braveheart is something I will address right away. Braveheart is the more entertaining movie, and probably better if you are looking for a classic Hollywood summer blockbuster of yesteryear. Outlaw King doesn't have the same pulse but is more authentic and grittier. It certainly is a post-Game of Thrones medieval epic, in both its tone and production. King is not without flaws. The second act is fairly weak and plodding and I could see people dropping out before the film's completion. Chris Pine is a fine actor and does the best he can in this situation, but he is absolutely out of place. (My Scottish friend was quite vexed with his casting and reminded me SEVERAL times how terrible a decision this was.) Meanwhile, I was surprised how good Aaron Taylor-Johnson was as "The Black Douglas," utterly vengeful menace that he was. Johnson has often been miscast as a leading action man, and he is starting to find his niche as a character actor. Florence Pugh had great chemistry with Pine, while Billy Howle's Edward II proved an able villain. With a big budget and plenty of action, Outlaw King manages to succeed despite its weak middle section. The violence is visceral, but most of the battles prove forgettable with one exception. That exception being the climatic Battle of Loudoun Hill, a muddy and gory affair in a manner similar to The Battle of the Bastards from...well you know the rest. It also has a hell of an opening with plenty of energy, which I wished was maintained throughout the whole affair. Outlaw King is certainly worth a look if you are into this kind of material, but not essential viewing for the uninitiated.

The story of Robert the Bruce, w/o the heavy-on-the-glory aspect rendered in the movie Braveheart, of which this story follows nearly directly after. Pine is more than credible, as is the entire cast, as he fights the British army while on the run and with only a handful of men. Edifying as well as entertaining, if slow in spots. Expect mucho bloodletting and carnage.

The (amazing) almost theater-like 10-minute shot in the beginning teases an entirely different, more intimate film but once it opens up, this actually turns into the best knights movie in years. Basically telling the story of Robert the Bruce from where Braveheart ended, the film's biggest asset is the setting. Real castle walls, the highlands, everything looks authentic and is beautifully shot. The Cast consisting of many familiar faces is great too. I can't speak for the historical accuracy, but it feels like they tried at least, even contradicting Braveheart from time to time. The final battle even gives its big predecessor a run for its money. A gorgeous, bloody, dirty medieval battaglia.