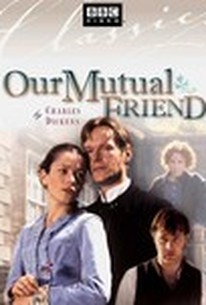 One of several British miniseries adaptations of Charles Dickens' novel Our Mutual Friend, this four-part version debuted over the BBC in 1998. The production's generous running time (total: six hours), enabled scenarist Sandy Welch to include virtually every important detail in this complex Victorian-era saga of how a mysterious waterfront death inextricably linked the lives of two young women, Lizzie Hexam (Keeley Hawes) and Bella Wilfer (Anna Friel). The richness of the Dickensian prose was complemented by the visuals, which incorporated everything from documentary-style handheld camerawork to Eisenstein-ish montages, and by the eerily polytonal musical score by Adrian Johnston. Our Mutual Friend was brought to America courtesy of PBS beginning January 3, 1999. ~ Hal Erickson, Rovi

Critic Reviews for Our Mutual Friend

There are no critic reviews yet for Our Mutual Friend. Keep checking Rotten Tomatoes for updates!

Audience Reviews for Our Mutual Friend

There are no featured audience reviews yet. Click the link below to see what others say about Our Mutual Friend!