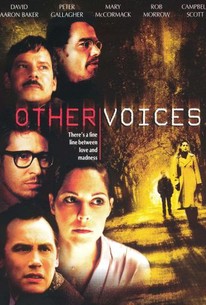 Dan McCormack spins this yuppie nightmare about lost identity, lost love, and New York. Phil (David Aaron Baker) and Anna (Mary McCormack) are a young couple whose marriage is slowly going sour. Each suspects the other of having an illicit affair. Anna shares with her analyst, Dr. Grover (Stockard Channing), that she is seeing another man, while Phil confides in his wildly erratic buddy John (Campbell Scott), that while he suspects Anna is sleeping around, he is engaging in a little extra-marital infidelity himself. Though Dr. Grover is unnerved by how flippantly Anna is treating her dalliances, John suggests that Phil consult with Jordin (Peter Gallagher in an outrageous French accent), one of Gotham's finest private dicks. Soon Phil finds himself jumped by Mink (Ricky Aiello), one of Jordin's goons, and Anna is stalked by her unhinged brother Jeff (Rob Morrow) who is trying to prevent a rendezvous between her and her mysterious lover. This film was screened at the 2000 Sundance Film Festival.

Critic Reviews for Other Voices

Likely to divide critics, this exploration of the breakup of one modern marriage is well-acted by the entire ensemble, which helps to disguise the film's thematic shortcomings and occasionally pretentious tone.

Audience Reviews for Other Voices

There are no featured audience reviews yet. Click the link below to see what others say about Other Voices!