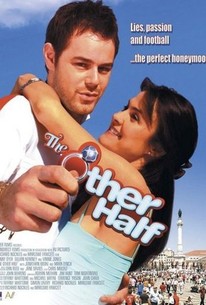 The Other Half Photos

A newly married American bride begins to suspect that her Englishman husband had ulterior motives when planning their romantic honeymoon on Portugal after learning that Portugal is hosting the European Championship Football Finals, and that her sports-loving groom just happens to have tickets to the opening games. Everyone agrees that Mark (Danny Dyer) and Holly (Gillian Kierney) are the perfect couple, and what better way to celebrate their marriage than with a romantic road trip through Portugal? Just as their journey is getting under way, however, Mark reveals to her that he recently scored three tickets to see the English national team play in the opening games of the European Championship Football Finals. Though Mark claims it was an innocent coincidence, it seems that everywhere the couple goes, football fever is sure to follow. As the games intensify and Holly begins to suspect that Mark has been planning this from the very beginning, cracks begin to develop in their relationship and the once ecstatic bride begins to have second thoughts about her union. Is football Mark's true passion in life, or could it be that he truly loves his new wife as much as he says, and that it was really just happenstance as he's claimed all along?

Vinnie Jones
as The Boss

Critic Reviews for The Other Half

There are no critic reviews yet for The Other Half. Keep checking Rotten Tomatoes for updates!

There are no featured reviews for The Other Half at this time.

The Other Half Quotes