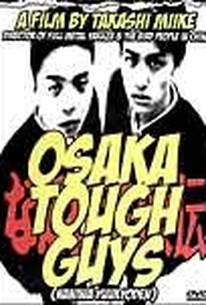 Something close to the Japanese equivalent of Marco Ferreri crossed with Herschell Gordon Lewis, Takashi Miike has become notorious for turning out drive in fodder rife with bizarre, grotesque acts of violence and wickedly perverse sexual acts that shock the living daylights out of audiences around the world, yet delight his hardcore fans and cultists. Miike continues to draw both praise and criticism from varying quarters yet has established himself as one of the most prolific directors in contemporary cinema. The director's 1995 crime opus Osaka Tough Guys stars Kentaro Nakakura and Yoshiyuki Ohmori. It tells the story of two hoods forced to take on paid work when they run out of money for booze, who end up being drawn into the spiderweb of the yakuza. Gaijiro Saito and Sei Hiraizumi co-star. ~ Nathan Southern, Rovi

There are no critic reviews yet for Osaka Tough Guys. Keep checking Rotten Tomatoes for updates!

rubbish and silly nonsense...the only redeeming part were two small gags...the slow scooter the two leads escaped on, and the yakuza initiation ceremony held in a family type "Denny's" restaurant..beside that, not much to enjoy