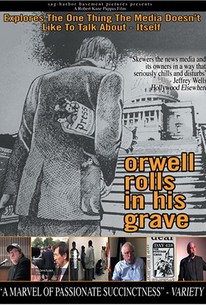 Orwell Rolls in His Grave Photos

Directed by Robert Kane Pappas, Orwell Rolls in His Grave questions whether the bleak, feverishly regulated world of author George Orwell's 1984 is no longer a dire fictional account of government power gone wrong but a creeping reality of recent American media trends. The film focuses on the media's least covered topic -- itself -- in an effort to trace the process by which newsworthy stories are either dismissed entirely or distorted into something more politically suitable for the heads of various media conglomerates. It also studies how influential politicos became responsible for an industry that was largely created in order to keep political abuse in check. Among the interviewees include legal scholar and former L.A. prosecutor Vincent Bugliosi, film director and author Michael Moore, and Danny Schechter, a former producer for ABC and CNN. Pappas also covers the expansion of the news media and examines whether the onset of competitive 24-hour news stations has actually led to a nationally less informed public.

Critic Reviews for Orwell Rolls in His Grave

For some, Pappas' film will simply confirm everything they've suspected of the fourth estate. For others, it will be a reiteration of points they make themselves. Those who've never thought about these issues may be in for the shock of their lives.

Comes across as a political science course videotape rather than a movie to fully engage a general audience.

The war against the neo-fascists still goes on, and the outcome at this point is far from certain. Mr. Pappas' film does its part.

Every incident mentioned in the film was reported in the media, sometimes ad nauseam, and the polls show that about half of Americans like where things are going.

A cheaply made, occasionally repetitive, but passionately argued documentary.

[N]one of this is news. But seeing it laid out so bare... is infuriating.

Professors, pundits, journalists and one elected official, Representative Bernie Sanders (I-VT), rigorously examine the issue of maintaining a free press in an environment in which journalists are increasingly the employees of major corporations.

A vivid and distressing documentary examination of the state of the fourth estate... a deeply fascinating must-see for anyone interested in the news, politics and civic life.

...it sometimes goes off into areas that, while interesting, are pretty tangential. Still, it makes a good (and scary) case.

Even though he refuses to excise about 15 to 20 minutes of unnecessary material, Pappas is nonetheless a steady editor who, less intrepid than dogged, pieces together a sustainably intriguing, suitably distressing exposé.

Audience Reviews for Orwell Rolls in His Grave

This documentary written and directed by Robert Kane Pappas is a relevant one for the modern society because covers topics including the Telecommunications Act of 1996, concentration of media ownership, political corruption, Federal Communications Commission (FCC), the controversy over the US presidential election of 2000 (particularly in Florida with Bush v. Gore), and the October surprise conspiracy theory. On the other hand, I can see the similarities with all other systems of control in China, Russia, Middle East and even Europe. It seems that government quickly follow up each other when they have to take freedom of speech from their citizens, regardless the political views. I cannot say that I didn't like the documentary: it was relevant, had trustworthy experts who know their subjects extremely well, it had facts, it had plenty of interviews... but somehow it was too dry and lecturing for my taste. I am a lecturer myself, and the most important thing is to involve the audience into the lecture! This documentary didn't do that for me - I was always aware that this is presented information to provide me with truth which should alter my views on democracy in the United States. No need for that in my case, because I was an owner of a radio station in the late 80's and I know a thing or two about the subject, and all I wanted is to enjoy the presentation. Well, that was hard if you are just lining up the presenters and facts. I was thinking to show this to my students, but I will edit parts of it before doing that, because in this form is a little bit too hard to "chew" the complicated subject of taking a democracy from the "demos" to the 1% of the US population! George Orwel's "1984" seems like a paradise compared with today's laws in the "Western Freedom" countries, with US as a leader. Recommended for the information and revelation, not artistic value!

This is a doc. everyone should see. The content is excellent - you want to scream and wonder why no one knows this is going on, but it's obviously because the media doesn't want you to!

Orwell Rolls in His Grave Quotes