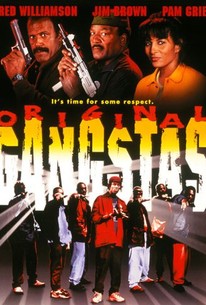 Larry Cohen, who directed a number of interesting and subversive exploitation films in the 1970s and 1980s, including Black Caesar and Hell Up in Harlem, reunited some of the biggest stars of the blaxploitation era for this tough-minded action opus. John Bookman (Fred Williamson) is a successful football coach who was born in Gary, Indiana but now lives in Los Angeles. When Bookman's father is shot, he returns home for the first time in years to discover that Gary has been all but taken over by a number of brutally violent youth gangs. Bookman learns that his father was shot in retaliation for going to the police after a young man was killed by gang bangers outside his grocery store; even worse, the kid who pulled the trigger was a member of the Rebels, the gang that he helped form as a teenager. Outraged, Bookman joins forces with the boy's parents, who also happen to be old friends: Jake Trevor (Jim Brown) and Laurie Thompson (Pam Grier). John, Laurie, and Jake organize the neighborhood against the gangs, with John's old gang brothers Bubba (Ron O'Neal) and Slick (Richard Roundtree) tagging along to show the young gangstas what the old school can do. If Williamson, Brown, Grier, O'Neal, and Roundtree all look a bit older than they did in their glory days, they all still boast charisma to spare, and anyone who liked their older films will have a good time with this one.

Christopher B. Duncan
as Spyro

Dru Down
as Kayo

Eddie B. Smith
as Damien

Charles Napier
as The Mayor

Kimberly Shufford
as Lady in Gym

Scarface
as Rebel Guard at Party

Dani Girl
as Dancer at Party
View All

This is solid action fare with saggy bits, but there's enough ass-kicking, Molotov cocktail-throwing and gunfire to keep their erstwhile fans amused, and the screenplay cleverly knits the old traditions of Shaft together with Boyz 'n' the Hood.

Original Gangstas leaves you feeling that more could have been made of this 'blaxploitation' reunion, but it's not bad -- and no more and no less substantial than the films of the original cycle.

The purpose is to entertain, and on that score the film delivers impressively.

Where Original Gangstas works is in its understanding that the stars are playing the characters they created 25 years ago as their older selves.

Although the leads are intended to be cool and menacing, the result resembles parody; scenes of drugs, guns and fights are likely to make audiences burst out in laughter.

There are no featured audience reviews yet. Click the link below to see what others say about Original Gangstas!