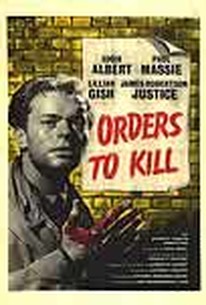 The moral dilemma of a reluctant American spy is chronicled in this psychological drama. He becomes an agent after he, originally a pilot, is grounded during WW II. He is trained to assassinate a Paris lawyer suspected of colluding with the Nazis. During his rigorous training for the killing, the new spy begins to have doubts about his upcoming assignment; these doubts increase when he actually meets his prey as the spy is unsure that the lawyer is really guilty. Still he fulfills his grim duty. Later he learns that the lawyer was innocent. ~ Sandra Brennan, Rovi

Irene Worth
as Leonie

Jacques B. Brunius
as Commandant Morand
View All

Critic Reviews for Orders to Kill

The director, Anthony Asquith, and the writer, Paul Dehn, have allowed the film to end on equivocation rather than statement... But Orders to Kill has a theme and a point, is not simply using the war as background.

Audience Reviews for Orders to Kill

There are no featured audience reviews yet. Click the link below to see what others say about Orders to Kill!