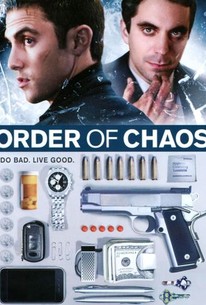 The borders between right and wrong begin to blur when an honest lawyer with a promising future grows paranoid that those around him are attempting to sabotage his career. John Pulliti (Rhys Coiro) is approaching 30, and well on the road to success. A lawyer at a powerful law firm, his biggest fault is his lack of mettle: he's constantly bending to his fiancée's demands, and he never stands up to his tough-as-nails boss. When ruthless, unethical attorney Rick Carlson (Milo Ventimiglia) takes a job at the firm and moves in next door to John, everything starts to fall apart. Not only does John become convinced that everyone around him is a threat, but his increasingly powerful delusions spark a disturbing personal transformation as well. Can John prevent himself from becoming everything that he hates, or has his fragile psyche finally cracked beyond repair?

Critic Reviews for Order of Chaos

It becomes painfully clear that the filmmaker actually envisions this mano-a-mano revenge tale as some sort of tortured commentary on the corruption of the American Dream.

Audience Reviews for Order of Chaos

There are no featured audience reviews yet. Click the link below to see what others say about Order of Chaos!