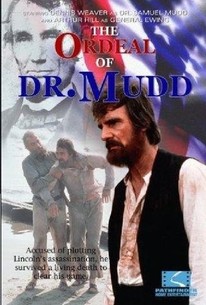 The tragic story of Dr. Samuel Mudd, who in 1865 was sentenced to a lifetime of hard labor at the American penal colony of Fort Jefferson, was previously filmed as Prisoner of Shark Island (1936) and Hellgate (1957). Made for television, The Ordeal of Dr. Mudd stars Dennis Weaver as the unfortunate Mudd, a Maryland medico whose only "crime" was to set the broken leg of a mud-caked stranger--who turned out to be John Wilkes Booth. Arrested on a charge of treason and complicity in the conspiracy to assassinate Abraham Lincoln, Dr. Mudd is at first sentenced to hang, but the military court decides to be "merciful," consigning Mudd to life imprisonment on "America's Devil's Island" in the Dry Tortugas. He endures the cruelties of the sadistic commandant and the condemnation of the public at large, until his selfless courage during a hellish epidemic enables him to win the sympathy of his fellow citizens. Ultimately, Mudd is pardoned by President Andrew Johnson, though it would be many years before his name was completely exonerated in the judicial books. The film goes to great lengths to vilify Lincoln's secretary of war Edwin Stanton (Richard Dysart), whom some conspiracy theorists now believe was behind the assassination plot. This aside, and excusing a few "politically correct" alterations in the known facts, The Ordeal of Dr. Mudd is fairly accurate. The film was originally aired on March 25, 1980.

Critic Reviews for The Ordeal of Dr. Mudd

There are no critic reviews yet for The Ordeal of Dr. Mudd. Keep checking Rotten Tomatoes for updates!

There are no featured reviews for The Ordeal of Dr. Mudd at this time.

The Ordeal of Dr. Mudd Quotes