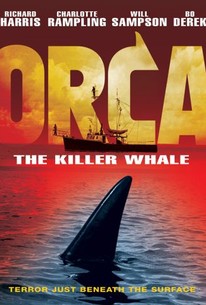 Another big-budget monster movie from producer Dino de Laurentiis, Orca concerns the mutual revenge pact between an obsessive whaler (Richard Harris) and an angry killer whale, whose pregnant mate Harris killed. The whale strikes back by biting off Bo Derek's leg, so Harris and concerned biologist Charlotte Rampling follow it to frozen northern waters for the climactic showdown. Just in case you like Jaws better than Moby Dick, there's a killer shark thrown in for good measure. Ponderous, pretentious, and dull, this opportunistic disaster fittingly sank at the box office. ~ Robert Firsching, Rovi

The moviemakers have thumbed heavily through the literature of the sea in their search for dramatic cliches.

Orca is essentially a rehash of an earlier De Laurentiis hit, Death Wish, with the killer whale in Charles Bronson role.

An incoherent blend of Moby-Dick, King Kong, and Jaws, hindered by what appears to be extensive reediting.

The whale has the best scenes and manages to capture the audience's sympathy. Certainly there can be none for the makers of this soggy saga.

Orca is man-vs-beast nonsense. Some fine special effects and underwater camera work are plowed under in dumb story-telling.

There is some startling footage, but Anderson's direction dithers perceptibly, and finally opts for an unpleasant mish-mash of phony ecological concern and meretricious sensationalism.

Orca is another Dino De Laurentiis presentation and if this whale had hair on it and cost as much, it could be just as big a bomb as King Kong. As it is, it's merely chicken of the sea.

It is a shame that Michael Anderson didn't go the fantasy route from the beginning. At least he would have achieved a rare or unusual film. But instead, he didn't achieve anything. [Full Review in Spanish]

And so, encouraged by someone in the film company once having read a comic-strip version of Melville, Orca slides inexorably down to a sea of slosh where Moby Dick and other symbolic mammals lurk.

A cheap and tacky attempt by producer Dino De Laurentiis to cash on the phenomenon of Jaws.

The glamorous presence of Charlotte Rampling and Bo Derek, plus some remarkable underwater photography, fail to make up for the daft narrative.

A decent mix of Jaws and Moby Dick with a beautiful score and unsettling scenes of animal cruelty, about a miserable, ignorant whaler driven to madness and forced to understand the full agony of an unstoppable beast consumed with a furious desire for revenge.

After the release of Jaws, many studios tried to cash in on the success of the film, thus a new genre was born, the nature gone wild genre. Orca is yet another one of these Jaws Rip-offs, instead it has a killer whale instead of a great white shark, and it's a killer whale that terrorizes. What separates the film from Jaws is that the whale has a motive and only seeks revenge on one person instead of creating all out carnage and terror like the shark from Spielberg's classic. This is a fairly underrated film that I quite enjoyed, and though it is nothing original, there is plenty to enjoy with this film. Orca is fairly underrated and it is a far better film than what you would normally think. I thought that the cast was quite good and Richard Harris did a great job in his role. The weak aspects of the film are that it looks dated and it could have been improved upon. Some parts just didn't seem to work and there could have been a bit of improvement as well. However this is a fun creature feature that is sure to delight fans of the nature gone wild genre and for a Jaws clone, it works due to the fact that the filmmakers were able to create something different with the all too familiar material. If you love this genre of horror, you should give this underrated gem a shot, with a good cast and interesting story, Orca is a film that is a worthy addition to the genre even if it's going for the Jaws angle. Orca has its fair share of imperfection, but is far from being an awful horror film. Give the film a shot if you love creature feature and be prepared for some mindless entertainment value that is effective constructed to induce fear in the viewer.

Orca it's, unfortunately, remember like just another Jaws' rip offs. When actually, Michael Anderson's horror present a story and the title character with humanly, different that Spielberg's blockbuster summer classic. We can see this went start to witness, not a meaningless killing by a sea creature -- the audience already saw this in Piranha, Jaws, it's sequels and others horrors natural genre -- Orca bring two obsessives that want mutual revenge. The whaler, Capitan Nolan (Richard Harris), kill a pregnant whale, the result is Nolan's regret, that empathises with the mate of the dead whale because he also lost his wife and unborn child in a car accident, and the male killer whale hate. Trying to seek revenge, the Orca, chase and attack crew members in the Capitan's ship. Until coming to the face to face, maybe "man to man'"duel. Orca it's a beautiful story about man against nature, violence which cause violence and ignorance. This, for me, make Dino de Laurentiis' production a real cult classic better and more remarkable and shocking that Jaws. Fresh.

On the surface, this film could be a tacky rip off from Jaws. Both contain sea creatures that causes havoc to small communities and are killers. But the stories are very very different. Orca is by no means as good as Jaws, but if Jaws had never been made, or if it had been released before Jaws then it may of stood a better chance. Orca tugs on the heartstrings. It's a story about the death of a killer whales and the havoc and disaster that one mistake, made by a man, caused to several people. The special effects are good, and the 'fake' whales are very convincing indeed. Some of the acting is a bit hammish but I think Richard Harris and Charlotte Rampling do a good job. I would recommend this film but as long as the viewer can forget about Jaws and see it in it's own right!