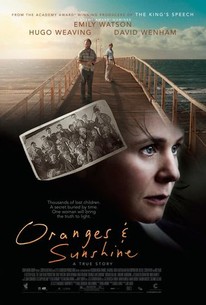 Critics Consensus: Grounded in a heartwrenching fact-based story, steered by Loach's sensitive direction, and led by a powerful performance from Watson, Oranges and Sunshine sidesteps its pacing problems and occasionally clichéd screenplay.

Critics Consensus: Grounded in a heartwrenching fact-based story, steered by Loach's sensitive direction, and led by a powerful performance from Watson, Oranges and Sunshine sidesteps its pacing problems and occasionally clichéd screenplay.

Critic Consensus: Grounded in a heartwrenching fact-based story, steered by Loach's sensitive direction, and led by a powerful performance from Watson, Oranges and Sunshine sidesteps its pacing problems and occasionally clichéd screenplay.

Oranges and Sunshine tells the story of Margaret Humphreys (Emily Watson), a social worker from Nottingham, who uncovered one of the most significant social scandals of recent times; the mass deportation of children from the United Kingdom to Australia. Single-handedly and against overwhelming odds, Margaret reunited thousands of families and drew worldwide attention to an extraordinary miscarriage of justice. Children as young as four had been told that their parents were dead and sent to children's homes on the other side of the world, where many were subjected to appalling abuse. These forgotten children were promised Oranges and Sunshine but they got hard labour and life in institutions. -- (C) Icon

Harvey Scrimshaw
as Be

Marcus Eyre
as Graham
View All

News & Interviews for Oranges And Sunshine

View All Oranges And Sunshine News

Critic Reviews for Oranges And Sunshine

The sincerity of feeling is unmistakable. So's the flat-footedness of the writing.

Emily Watson, who always brings a special grace to the screen, gives a multilayered performance to the role of Margaret Humphreys, who not only puts her own family dynamic at risk but finds herself physically threatened.

The result is a problem drama with more problem than drama.

The most powerful sequences in the movie are the linked vignettes involving Margaret and the various grown-up children whom she attempts to help in their search for -- what, exactly? Closure? Catharsis?

Once, very early on, the secret deportations have been exposed there aren't many new places for the film to go - just more scenes of an increasingly tired-looking Emily Watson trudging around with an armful of file folders.

A work of controlled, retrospective outrage, telling the bizarre true story of how tens of thousands of young British lives were irrevocably ruined.

A social issue drama whose fangs have been removed, Oranges and Sunshine has little to offer in comparison to past or recent cinematic genre efforts.

Despite the difficulties the team faced when filming on opposite sides of the world, Oranges and Sunshine beats with one heart and develops its story coherently.

It takes one of the most obscene scandals in 20th-century British politics and all but kills it off with its self-righteous stance, plodding script, mournful violins and clunky construction.

Oranges and Sunshine is a powerful exploration and its subjects should be proud.

Audience Reviews for Oranges And Sunshine

Really good movie based on sad, but true, events. A rather painful movie to watch. Any time anyone is brutalized is awful, but when children are involved... well, it causes me to yet again wonder why mankind does what it does. The events that happened here are horrendous, and I applaud those that tried to help these victims. Watching this well done film has prompted me to furthur search this story. .....

A gut-wrenching tale, based on a true story, of the campaign by Margaret Humphreys, a British social worker, to understand how and why thousands of children were torn from their families and sent to Australia and other colonies, to live in horrible conditions. Emily Watson is a tour de force as the woman who would not relent until she had some answers for these lost souls who came to her for help in trying to find who they are. An excellent supporting cast, a tight script and a compelling story come together to make this an emotional journey and a recommended film.

'Oranges and Sunshine'. Emily Watson brilliant as an unduly guilt burdened, relentlessly driven woman, trying to write the wrongs of the 100,000+ kids involved in the organised deportation between the U.K. and Australian governments, bringing them some level of closure and connection to their families. Moving, and revealing a part of history I wasn't previously aware of, with commendable supporting performances from Hugo Weaving and David Wenham.